When I challenge someone in a ladder but then the person leaves the ladder it says I’m challenging the #-1 on the ladder. Could you make it so the game stops when they leave. The game could also turn into a normal correspondence game.

This is also a way to cheat, although it happens less often. It still counts towards one of your 3 or 5 possible challenges, and if someone isn’t even on the ladder, you still have to finish that game before you can get more challenges if you have your max or something. One problem though is that one could end up with a ton of games that they don’t even really want to play if their opponents leave the ladders.

That is actually a backdoor for getting back into ladders. Even if you drop out, you can join again (to bottom oc) and those ongoing games still count as ladder games. So ginger2008 can still join back, and get his/her position above Cool Person if he/she wins that ongoing ladder game.

Note that its not “way to cheat” but its more like a backdoor that might get you back into ladder in case you accidentally timeout once.

Here, one player dropped out and I leap-frogged another in the ladder.
It seem like I should be allowed to challenge 2 more people.
In other words, players that you’ve challenged, but are now ranked below you, do not count to your challenge limit.

This would also address the problem of what to do with players who have left the ladder - they would not could to your challenge limit. 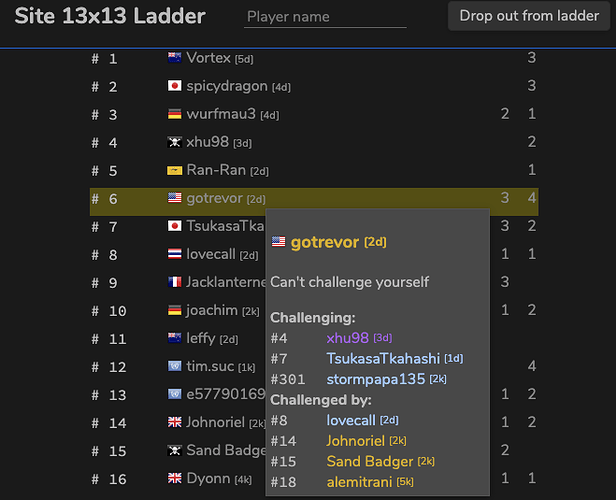 I think if you’ve challenged someone but jumped ahead of them because you’ve beaten someone else, they still have a chance to jump back ahead of you if they win your challenge game. I think some compromise has to be made with allowing simultaneous ladder games, otherwise you could just resign once you pass someone out to no effect (although they’re still ranked games).