Hey guys! I just had my highest ranked win, beating a 9k! It was a super close game–I won by 5.5. Was wondering if you guys could review it for me. I played black in this game.

but just to show how big our hearts are, here are my ideas: 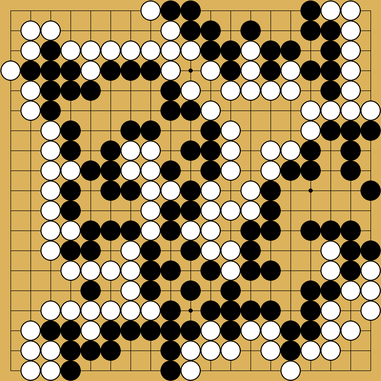 Overall I say my biggest advice would be to learn to tenuki in time. Of course it is good to stay safe and strong! But there has to be balance. Do not be afraid to sacrifice a few points (as long as your groups stay safe) to take a bigger profit elsewhere. It got most weird in the second half of the game, where white had HUGE potential on the left, like bigger than anything and you both kept ignoring it for small, basically endgame exchanges.

Otherwise your play seemed calm, but maybe a little too calm. backing off from almost any fight, letting white do what he/she wants without much resistance (it can also be connected with the fear of playing a stronger player, but it is the wrong way to go in my opinion). I too am more of a non-agressive player, but when your opponent has more points you need to press a little to get back into the game.

Sorry to say, but in my opinion black won only because white completely threw the game in the end. Not sure if it was time pressure, or plain misread. That should not take away from your feeling of victory. You stayed calm and took advantage when the opportunity arose, which is a great quality. Just that we should not kid oureselves, white was ahead most of the game.

Hope the comments help (I also asked Leela to chip in a bit) and of course feel free to ask questions.