Hi !
I played this game against CrazyStone on my phone. I would love comments on it, especially about moves 10 and 30.
I played as white, and crazystone as black (14k setting). Thank you ! 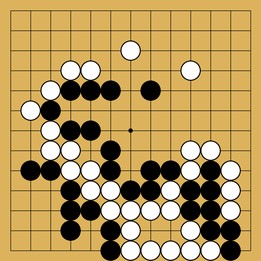 On move 10, if you live, you’re living small while strengthening your opponent. Black can easily take solid profit in the bottom corners while pushing your invading group around. In 13x13, the corners are huge. You’ve deprived your opponent of the side, but they’re gaining so much more than that, while you don’t really gain anything. Both of your corners are open to invasions. You’d be better off playing a move that developed your territory than a move that tried to invade this harshly.

On move 30, it depends on what you’re trying to do. If you think you can kill the middle, then cutting the small knight is reasonable. However, your opponent should be able to profit in the corner by pushing the attaching stone away. If you want to reduce, then dropping under at the 2,4 point is a better way to do so. You can either live in the corner or connect out to your earlier invasion with some profit on the side.

Also, lots of people don’t review bot games. If you want to get more help, you should play more human opponents and review those games.