Hello im a 9kyu 9x9 player and i tried some of those cho chikun elementary tsumego puzzles here on OGS. Out of the first 50 25kyu ranked puzzles I failed about 5-8 total. I just thought it was interesting how I reached a strong rank but I have such poor skills at life and death. I think playing strategicly for territory is the only solid skill I have developed and I really need to work on tsumego if I am failing puzzles for beginners.

Are the puzzles in that collection actually 25k? I remember looking at them last year (not on OGS but on the pdf) and thinking they were pretty challenging. I was about 15k at the time (old ranks)

5-8 wrong out of 50 is pretty good I’d say. Some mistakes are inevitable.

These ones , its called cho chikun’s encyclopedia of life and death elementary

Interesting indeed, since 9x9 is mostly about life and death.

Rating tsumego is hard job. I wouldn’t care too much about the supposed rank.

If you want to check your rank against tsumego, you could try “black to play”. 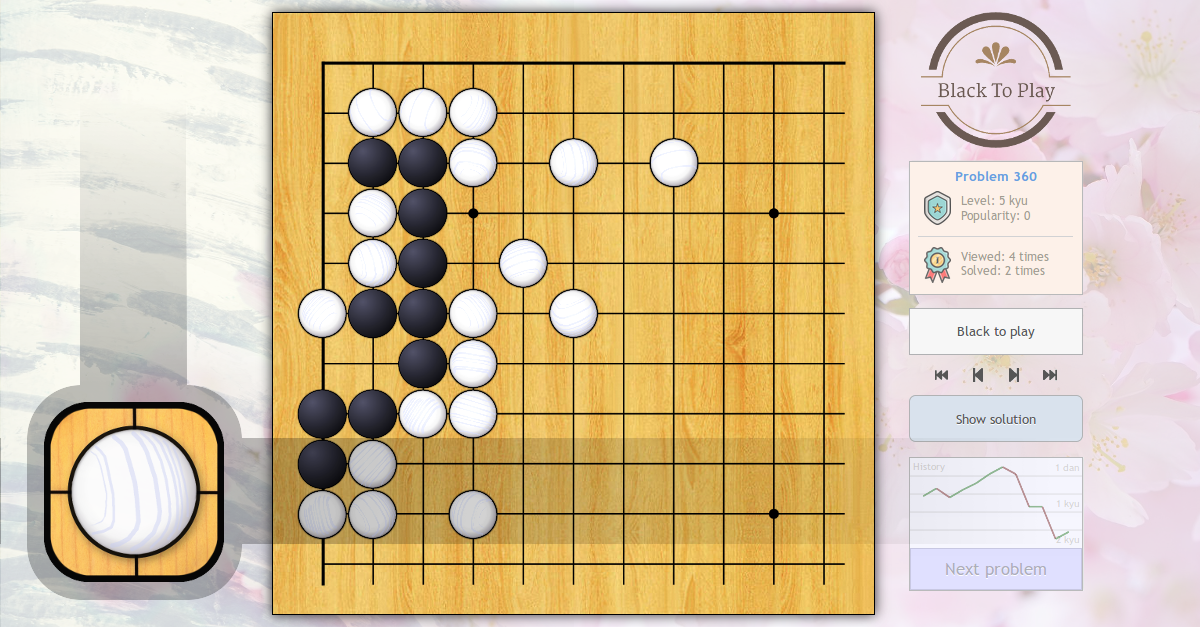 Practice your Go skills with this free teaching tool

Yeah, the creators of the collection get to set the difficulty of the puzzles themselves.

Even if those rankings for those puzzles were correct (as in matched players levels at the time) when they were uploaded in 2015, there’s been many rating system changes since then.

I think it’s very likely that very few puzzles ranks match in any way the ranks of players on OGS.

The other thing is that I believe every puzzle in that collection is marked at 25kyu, so it’s probably just laziness in not having to set the difficulty of 900 puzzles individually

(Edit: Also it doesn’t look like sunspark is playing here anymore, so it’s probably not going to be updated in future either I expect)

To be honest its not that I cant solve them its just that I dont fully check every possibility, I think I need to practice tsumego way more often. Im failing puzzles that only need 2-3 stones played >=(