Could anyone review this game for me, please? slight_smile: 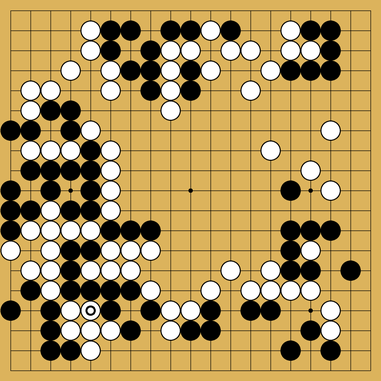 I’m the 6k in this game, and I lost by resignation. In the chat after the game, I said that I should have played A6 on move 141. After reviewing the game, I’m no longer so sure of that, as I don’t think I had any large ko threats. Also, if I had played A6 and then made a ko threat, I think I would have lost the corner in the bottom left, too.

So I am trying an experiment : we seem to be about the same strength (and your opponent is probably a bit stronger than me), but I still made a few comments on your game. Please view these more as a discussion then a review by a stronger player

Thanks! Interesting variations on move 21!

Wrote a few more ideas , including a variation that kind of refutes my move at 21. I think your main problem in this game was not taking advantage of white’s weak groups and in turn letting him attack you own weak groups hope it is interesting

(A stronger player should still definitely give his advice on this ! )