4kyu... ish game. Would anyone care to review this for me? 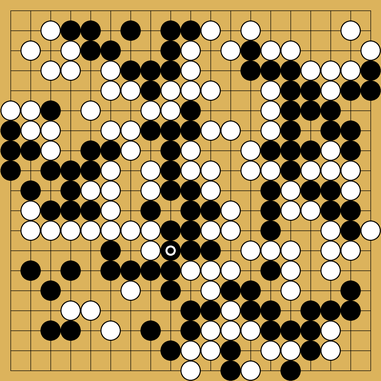 I’d say this definitely calls for moderator attention. Other games are similar.

Weird that he went from friendly to douchey so quickly. Wonder if it’s a culture/translation thing?

Anyways, I’m about your same strength, but I left a review: 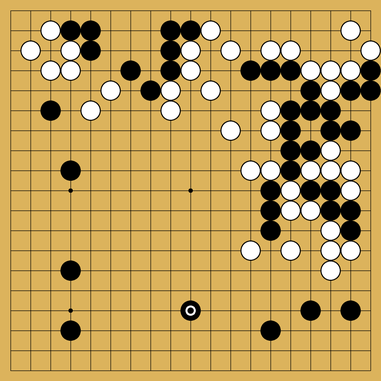 Thanks for the input ckersch88. much appreciated.

I ran the game through Leela, as well, and I’ve updated my review from earlier, accordingly.

My assessment of the game wasn’t great. I identified a few slow looking moves, which leela agreed with, but the computer thinks that the right/top right variation is great for white, and that white has a substantial advantage going into the middle game.

In the middle game, move 83 is where leela starts identifying some serious blunders for white. 83 is slow, and optimal play brings black close to equality, though black doesn’t find the best sequence to respond with. The reduction on the left is good, and leela still has white at solid positive odds after that.

The main mistake is direction of play after that. Leela thinks that the best approach is to attack the stones you isolated on the right. This attack will give you thickness facing the center that you can use with the rest of your influence to build that area up. Rather than invading the bottom, white can just play reduction moves on the edge of black’s territory, take a huge center in exchange for black getting most of the bottom, and win. there also seems to be enough room to invade and live in the bottom left, but the sequence is long and fairly precise looking. If white does all of that, then white has enough territory to win the game, even with best play from black.

The bottom invasions, on the other hand, were mostly overplay. Once black refutes those and gets thickness, the balance of power shifts decisively to favor black. The point of no return is around the time when he starts insulting you.

Personally, I have a lot of trouble pulling off those invasions, or even judging proper reductions, which is probably why I wrote the game off while the computer still had you winning. I’d rather break up the bottom sooner, rather than letting black build it up and relying on invasion/reduction magic to kick in. Definitely something I need to work on, along with my positional evaluations…

Oh, and your opponent definitely isn’t a Korean 4d, based on an unscientific assessment of how Leela’s judging their play…

Wonder if it’s a culture/translation thing?

I’m with @SanDiego. I see how that could apply to “your skill is as good as an elementary school student,” which might conceivably be meant as a compliment; “you are a sewer,” however, is hard to misinterpret and is beyond harmless banter. Is he overplaying a bad Hong Suyong impression or something?