Transcript of my thoughts during the game:
Move 1: “Ok, lets play some basics, like Batts does. I’ll just surround territory and be alive. No need for anything fancy.”
Move 6: “Ok, I’ll just approach the 4-4. I know those joseki, kinda, and I want to keep things simple.”
Move 14: “Well, if I cut there, I’ll probably learn something.”
Move 26: “…I guess I’ll treat all eight of those stones lightly and play something that looks big. I didn’t want those stones, anyways.”
Move 70: “I didn’t want that bottom territory, either. You can have 20+ points down there. And those stones.”
Move 100: “And those stones, I guess. Boy, I’ve got a lot of light stones that I didn’t really want this game. I’m getting influence though, so I might as well just try to build a giant moyo and hope for the best.”
*Editor’s note: I wanted those stones.
Move 132: “I guess I can either let him invade my giant moyo, or I can save those stones.”
Move 134: “I like my giant, but still porous, moyo. Now that all of those stones are behind enemy lines, let’s see if I can kill something with them.”
Move 154: “BLOOD FOR THE BLOOD GOD!”
*Editor’s note: spoken while missing some obviously capturable stones.
Move 170: “If that gigantic, horribly weak group that makes up a sizeable chunk of the wall of my moyo dies, I’m kinda screwed. Let’s see if I can avoid that.”
Move 174: “Ok, that’s alive. Maybe that’ll make up for dying almost everywhere on the bottom of the board. Now its time to…huh, I wonder why he resigned?”

I really didn’t think I was winning for most of this game, and I made some dumb mistakes in reading/fighting. I won because my opponent resigned, but I think the game was still close at the end. I gave up a ton of territory in a few of the corners. I played out an ending that came out to W+3.5, but I had a big moyo, which added a few intimidation points, I guess. Mostly, I felt like my stones were barely held together for most of this game. If my goal is to play fairly solidly, and not rely on reviving half of my dead garbage with a big fight, how could I improve on this game? I’ve left a review, as well, with some more detailed thoughts on what was going on. 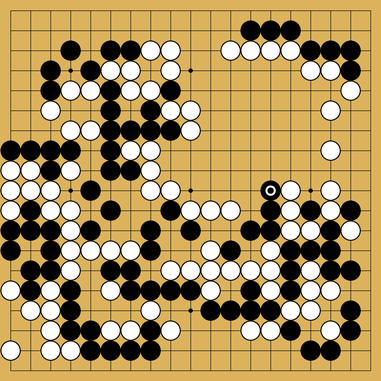 Not surprising. I suspect that all of those stones on the side should be dead, and if they’re dead, white is massively behind.

However, I asked my opponent to prove they were dead before I was willing to resign, and they were unable to do so during the game 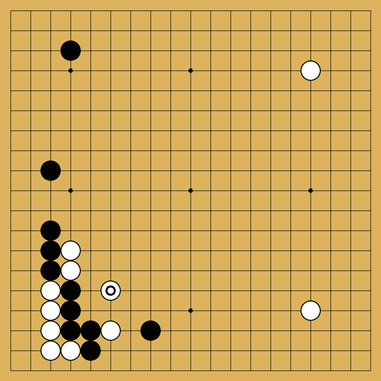 
My take. Looks like you made a tremendous comeback from a pretty dire position. Good job.

Thanks for the review! I usually don’t post games that I win, but I made an exception for “shouldn’t have won”

Do you have any recommendations for the best way to learn from books? I’ve read over a few in the past, but have trouble telling if I’m actually learning from them.

Thickness is needed for center toward style. https://online-go.com/review/311265