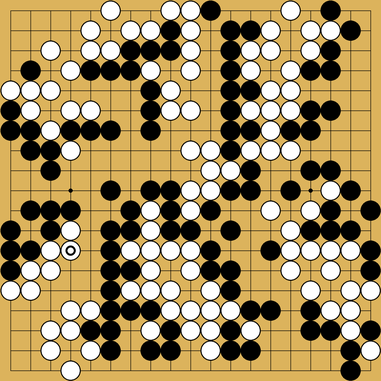 
Move 35, after reviewing with LZ, M3 looks like a bad move, but i dont understand why, i thought that trying to stay connected was the main strategy in Go. Also, if it is so easy to disconect both groups, then which is the idea behind O4? What better move can i use to replace it?
2 Likes
aesalon November 24, 2019, 6:51pm #2

O4 is quite good. I know that this joseki or this one are other popular choices in this situation.

The game problem is that you are too concerned with staying connected. White’s group is the weak one here, attack! Or at least don’t be afraid of being attacked by a weak stone.“Don’t attach to a weak stone” is a relevant proverb.

I put my move suggestion in your game.

so changing move 35 to L3 (like I’m guessing is what you’re asking) seems very obviously bad to me. It allows w to disconnect in such a way that the bottom right has no base and will be forced to run.

But there is one benefit: it makes w heavy. w will also have no base and run with you.

But you also get that from moving to M3 (like what happened in the game), except now bottom right has a solid base (and is probably locally alive) and now bottom left is a bit thin while w has a bit more strength (but only a bit), and also just feels more natural.

Now, about O4, it’s a reasonable move, but you shouldn’t play it with the expectation of being connected to J3 (simply too far) – what it’s really aiming at is the opportunity to pincer R6 (which you had and didn’t take).

If we are to look at other moves than O4, my favorite would probably be the kick at R5, resulting in a joseki like this (although don’t count all that as territory just yet, the opponent can still invade 3-3). Although in some similar situations I tend to play a move like S4 to keep the territory (S5 is similar, but I don’t like the aji it leaves b if he leaves it there).

my mistake, i was referring to M3

Thanks for the explanation

Yeah, M3 itself seems fine here to me (as long as you’re prepared to handle the bottom left group)

Move 34 was unreasonable. White was counting on fighting strength to create a disturbance.

Looking at the balance of power, many black stones were confronting one white stone. So Black should not have feared that situation. Rather, Black should have fought back strongly. Black didn’t. The game move was submissive.

i thought that trying to stay connected was the main strategy in Go.

My first reaction: “do or do not, there is no try”. If you try to connect and fail, it doesn’t do you any good.

Now, “stay connected is the main strategy in Go” is not true either. You have probably heard it mentioned for weak groups, but in this specific case it’s white that is weak, not black.

if it is so easy to disconect both groups, then which is the idea behind O4?

O4 makes it difficult for white stones to settle on the lower side. an it helps support an extension at P7, as @aesalon suggested. P7 could have been played earlier in the game.
Black R8 looks severe too, and black O4 would help in the ensuing fight.

Move 35, after reviewing with LZ, M3 looks like a bad move, but i dont understand why, i thought that trying to stay connected was the main strategy in Go.

m3 is bad because, your 2 black groups doesn’t need to be “connected”
neither does m3 connects your group

your 2 black groups are pretty darn strong to begin with
by attaching at m3, it only strengthens white

then which is the idea behind O4? What better move can i use to replace it?

o4 is a fine move
r3 can be replaceable