Another question I have, which I guess you can see in the last screenshot is: What are the numbers on the side of the board showing? 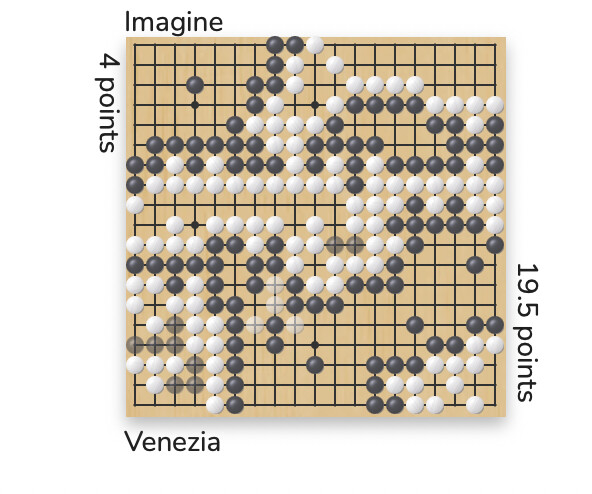 When a game is scored, it’s not the score anyway. I think it’s something like captures and Komi together? It’s not very useful. I guess hide it or swap it for the result like Vsotvep says, or ideally the score if it is there.

Yeah - the mini-goban has never been used for finished games before (as far as I know?) … I bumped into a few problems like these, obviously didn’t catch everything. I was so happy to have the image of the game I wasn’t really looking at the numbers

Most of that stuff has fixes now, thanks.

Fixes: - Lingering PieChart artifacts on resize (corner cases) - Display of …game hover popup when pie chart won't fit (don't do that) - Overlapping textual win-loss information in by-game chart in phone form factor (don't display this info, for now) - Display of meaningless points when game is finished (don't do that) - Display result of game that is finished in the title (do do that) ## Proposed Changes Got rid of renderWinLostResultsAsText in the by-game component, for now. This is actually buggy in the original chart component: the render of this extends below the extent of the element (it looks like vertical clip was turned off to allow this). but due to fortunate spacing in the rating-by-time case, it looks almost OK. I couldn't quickly work out how to solve this properly - the whole "calculation of the height of various elements" needs a big tidyup to be comprehendable, then this fix would probably be easy. In the mean time, simply not showing it works. The turning off and on of pie chart had some buggy cases during resize even in the original - that should be fixed now (I had thought that pushing it off to the right offscreen was enough, but it turns out sometimes it can sneak onscreen in thin form factors, so now it is completely un-rendered)

On mobile the pop up game feature is a bit iffy. It disappears after about a second and sometimes it’s easy to click into the game by accident.

I’m not sure where to put it, unless one wants to leave collapsible space between the rank graph and current games.

It occurs to me that clicking on the rating chart in the phone form factor should just take you direct to that game page. There’s not much point in popping something up the fills the page anyhow…

The fixes and enhancements are available now, 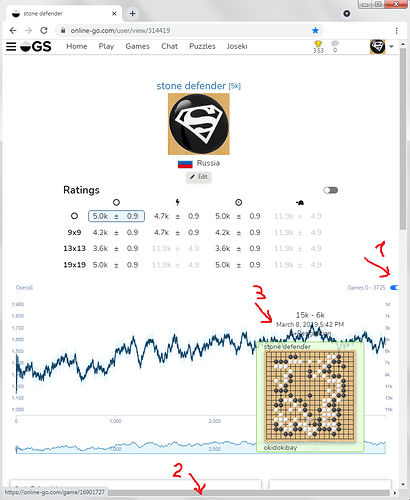 when window is narrow enough that circle diagram disappears:

because (1) is always stays too far at the right of the window, width of site always more wide than window and it causes (2) to always exist

I tried to see rank of highest point on the graph, but its impossible (3). Game preview appears in front. It should be disabled for narrow window or moved to other side of what I click on the graph.

Can you let me know what screen size that shot comes from?

I’ve reproduced this now … will fix.

I’ve reproduced this now … will fix.

Actually, I didn’t quite reproduce it. I can reproduce the preview appearing over the graph, which is not intended, and I can easily fix that.

However, I can’t reproduce your (1). You have a scroll bar there which is obscuring the window - I don’t get that. I can’t force my browser to produce a vertical scroll bar on the profile page no matter what I do!

So … what browser, device and screen resolution?

in both Chrome and Opera. Resolution of window you can see in screenshot, it works with any more narrow sizes of window too.
Just move that button slightly to the left, you don’t need to have that bug yourself to fix it.

What device is this on? As I said, I don’t get scrollbars on this page at all.

Do you get the popup from clicking, or only from hovering?

I tried to see rank of highest point on the graph, but its impossible (3).

If you click outside the graph and wait a moment, the preview will disappear. Then you can chose the maximum point that you want. This is a workaround, not a fix - I’ll fix it.

Just move that button slightly to the left, you don’t need to have that bug yourself to fix it.

Thanks for the advice. I’d rather know what’s causing the problem.

Windows, …not the latest version
I don’t see how sceen size may have anything to do with window size

from clicking, or only from hovering?

from hovering, I can’t even place red dot in intended coordinate.

But I don’t get either of those scroll bars - vertical or horizontal.

You’re right - I was asking of course about window size - I usually have OGS full-screen, so I used the wrong word because they are both the same for me usually.

If you got that preview by hovering, then it should disappear easily when you move your mouse away from it (off the graph). That will allow you to chose the point that you want.

Things are more difficult on a mobile device, where it is click instead of hover. Then I can’t detect when you mouse away (because you aren’t mousing

I can’t even place red dot in intended coordinate.

Just move your mouse out of the graph, the preview disappears, move it back in to the coordinate that you want.

from hovering, I can’t even place red dot in intended coordinate.

Just in case this is the issue, you can also highlight certain regions below the graph to zoom in. 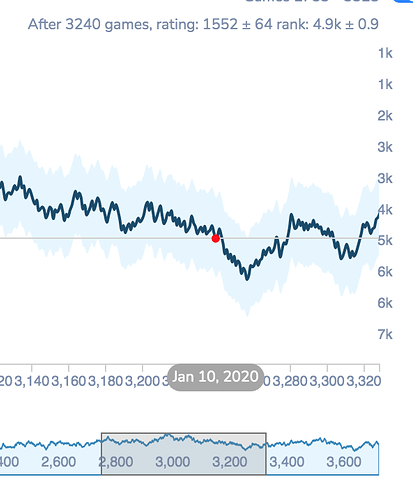 That will hopefully make it easier to pinpoint certain peaks/games etc.

Once you picked a certain window size, it can also be dragged along, to keep the same zoom level at different points.

the vertical scroll bar that is obscuring the button.

I have vertical bar on all sites and it never obscured anything. Horizontal bar rarely exists because sites usually use correct measure of width of window.

I was asking of course about window size

Resolution of window you can see in screenshot,

it works with any more narrow sizes of window too.

If you got that preview by hovering, then it should disappear easily when you move your mouse away from it (off the graph). That will allow you to chose the point that you want.

nope, it disappears, I try to move mouse again and preview instantly causes trouble again, I fail again, try again…
only this is way around:

Thanks for all the info.

stone_defender’s account case is definitely an excellent test case: an account with thousands of games and a somewhat narrow window.

We don’t have such a test account (thousands of games) on beta.

The narrow window case is definitely a challenge.

Looking back over what I did, I intended to remove the preview for narrow windows, then I thought “maybe actually this is OK”, and left it in, because it is a shame to lose it.

However, I can see that it’s going to cause ongoing grief popping up like that, so maybe “remove in this case” is the best solution, at least in the short term.

Or maybe click-to-get-preview would be best when the pie is not displayed?

The problem with click-to-get-preview is that it is not “discoverable”. There’s no particular reason why anyone would think to click on there…

(PS I got vertical scrollbars in Opera, though not horizontal. stone_defender’s problem#1 is wider than just the ranking graph button - it happens for the rank table button as well)

I haven’t really been following this, but the pop-up game previews look great, and I hope they will work well enough that we can put them in more places, such as tournament and ladder pages!

As illustrated here, the real challenge is determining where they should appear in all screen configurations, and how we know it’s time to take them away.

I’m happy to take on making them appear elsewhere, if you have suggestions that include thoughts about those problems.

… more on the stone_defender case…

… what I can see is that when you have thousands of games, clearly each pixel is worth more than one game, so you can’t possibly select “the exact one you want” without zooming in as shinuito described.

When you do zoom in, the problems stone_defender described seem to be solved - you can select the game you want, and you can move the mouse in such a way that the preview “gets out the way” if you need to.

So maybe I don’t have to change it?

it currently only appears at the right side.
if you work with right side of the graph, it should appear at the left

When you do zoom in, the problems stone_defender described seem to be solved

its not as easy as just zoom in, you need to zoom in so that needed point is at the left side of selected area so preview finally not obscuring it. Not everyone will solve such tsumego fast.