I (playing W) don’t care about the rest of the game because after move 5 I lost interest. So, what is the best move for W for move 6? The obvious one would be K4 or K3, to continue the symmetrical thing. But if W wants to avoid this and make the game less boring, what is the best way to disturb the Black top row? I tried C17 which is just a desperate move to get something going, and it sort of survived but only leads to a battle with little gain. Later, at move 18, I did O17, again, trying to break the upper row, but of course in such a tight spot it’s already a dead-end street. So, how to disrupt openings like this? 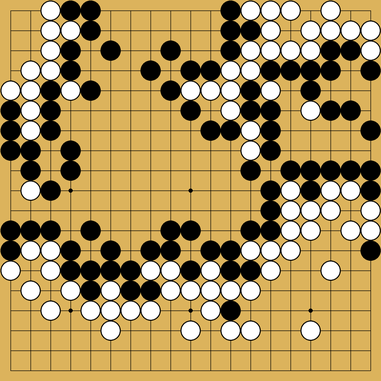 PS: I think the opening is the least important thing for you at the moment. It doesn’t even matter if you play something like K17 or K11. It’s way more important to learn how to fight

This is a great time to reflect on the life lessons that this game has to teach us.

I can tell by your phrasing (“desperate”, “break the upper row”, “disrupt this opening”) that you are looking at the situation with a strong feeling of jealousy. It looks like black is claiming an overwhelming framework that you need to take away immediately. In reality, it is smaller than it seems. The rest of the board is also big and still empty.

Remember that you get just as many stones as your opponent does. Without mistakes, the end result is 50/50 (with a miniscule advantage for white due to komi). Take your own share and feel confident about it. Let your opponent have his/her share and feel generous about it. If you want to play strong Go, you need to relax and overcome stress and anxiety. You might become 3 stones stronger just from this shift in perspective.

On the concrete situation, white has a lot of options.

Every time you give sente to your opponent, they have a new chance to make a mistake

I should add that my feedback applies to the opening. You played good moves and then felt awful about it. At move 80, white’s potential is greater than black’s.

You lost this game from move 82-94, where white stays low while black invests many moves to seal off a large center. In such a situation, play at the border where the two spheres of influence meet. Place your stones not too deep and not too shallow, reduce your opponent’s moyo while you enlarge your own, and you will come out on top.

Do you actually enjoy playing blitz? It’s fine if you do, but you seem to be impatient and upset. You’re playing upwards of 15 games per day. Are you taking the time to review?

As for the game in question, the sanrensei opening isn’t as large as it looks. You can calmly approach both corners from the outside and then reduce from the middle and your opponent will have around 30 points, none of it perfectly secure. It’s a legitimate opening, but it seems to thrive by angering weaker opponents. It’s not a sure win, it’s just an option that plays for influence.

Just complete your enclosure of your lower right corner. Black cannot fix all her weaknesses with one move so there is no need to rush an attack. 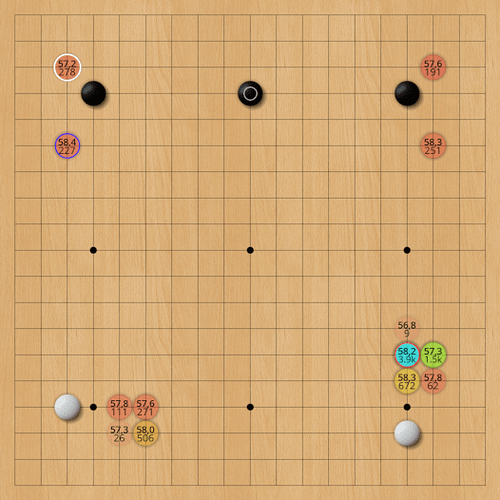 For the position you ask about, it’s a sanrensei and you can find continuations to it in videos or ps.waltheri.net. Here https://www.youtube.com/watch?v=ayzIlC2fRrw&t=2246s at 1:50, his opponent plays that same move and Dwyrin plays against it. He has more videos about the subject on his channel.

I haven’t read Direction of Play, but if both players take one of the four courners with the first four moves, I don’t believe any of them could be remotely considered game-losing. According to waltheri white wins about 40% of the time from that position. And that’s in pro games. LeelaZero believes the win% didn’t change by more than 0,2% from an empty board.

If you’re a ddk or probably even sdk, I think there are far more important things to study than where to place the first couple of stones most efficiently. My suggestion would be to play anything that seems fun or unknown and see where it gets you.

If you’re a ddk or probably even sdk, I think there are far more important things to study

I think direction of play is one of the most important things to study as it affects the natural flow of stones and has a huge impact on what game you end up playing. Objectively which 3-4 you take might not be locally relevant but its impact on global fuseki shouldn’t be underestimated.

I agree the first 4 stones will have almost no impact on EFFICIENCY but the comment you’re replying to is topically regarding direction of play, in which case where you put the first 4 stones does have quite a large (though not irreversible) impact.

Yes, but you’re missing my point. I want to say that at ddk level it doesn’t matter so much yet. Even if you put your first stones in a good way with regards to direction of play, if you don’t know the continuations that make them actually work out like you want, then it doesn’t really make any difference.

I think it’s more important to study how to get territory secured, how to fight, how to invade and how to make good shape.

I didn’t miss your point, I disagreed with you.

Yes, I can sort of see that even with a symmetric opening like this, the game can go in lots of ways. It’s just such a boring start for me (and that’s because I am a lousy player) that I lose all interest, which is definitely a way to guarantee losing. If that means I should change my attitude, you’re probably right. But I was just hoping there was some magic trick to avoid this situation. There isn’t. Fair enough.

Funny that you say that. Personally I have the feeling my fights are okay (on the 17k level more or less, and I don’t have much interest getting much better) but my openings are just moral crushing (on the 25 k level which I think I could improve)

Thanks, I like the advice about playing where both influences meet. As stupid as this might sound, I never thought of that and it seems like very good advice.

Yes, I do enjoy play blitz (the faster the better) and yes I am extremely impatient (which is why I like playing blitz). I am aware this way I will never get better than 17k, but that’s fine with me. I get upset when I am hitting a wall which as a 17k (or 18k) player I shouldn’t hit, which is this particular opening which leaves me frustrated. I am playing loads of games per day, because I do it as a quick break, nothing more. I like the ones where it’s just a couple of free-for-all fights all over the board and an occasional clever move. The rest bores me. Maybe that means I shouldn’t even play GO, but occasionally, it’s fun.

But I was just hoping there was some magic trick to avoid this situation. There isn’t. Fair enough.

There is, just play an approach before your opponent can play the third stone of the sanrensei.

If you’re white preventing a black sanrensei, of course it would be nice if you did it in sente, so you can grab the last corner that you ignored.

But even without that, if you’re confident in fighting skills, you should be able to handle it even with only one corner. For example, here’s a cool opening that will definitely not have any moyo’s: 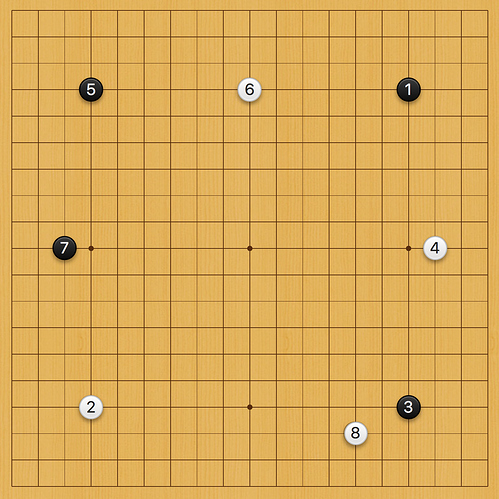 Or what about this one: 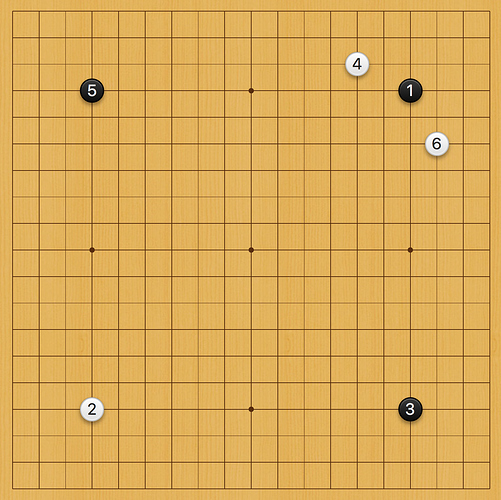