Analyze mode win percentage doesn't start at 50% for even games?

I’m curious why the win rate % doesn’t usually start as zero? Is it based on the rank difference or the amount of the komi or something else? It seems to me that it should start at exactly 50% 50%.

At their current level bots seem to think White has a teeny bit of an advantage thanks to komi.

(Rank has nothing to do with it, the estimate is always considering the best moves the bot can find, not how likely the human is to mess up)

@AdamR has it right. When komi includes a half-point, Go is no longer a futile game (permits draw). Rather, one player will win even if both sides played perfectly. With current tournament komi, most Go bots project that White will win. But because mistakes are virtually inevitable on the 19x19 sized board, the uncertainty is so high that the initial estimate is close to 50%.

You can get a prediction close to 50%, when you play games with 7.0 points Komi. 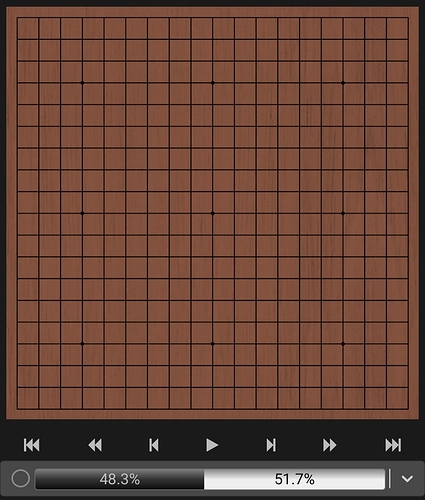 Humans made komi, bots made bot play.
If you demanded the bot call the game 50/50 at the start, you would really be missing the point of training an algorithm without human intervention.

The winrate is what KataGo estimates for a game KataGo vs KataGo, starting with the current board position and Komi. It isn’t an estimation of your chance to win.

I just played a game of 9x9 with komi of 5.5 and the starting win rate was 63.7 for black. I think it’s really interesting how far off from an even game KataGo thinks that is.

I totally agree, it’s just really interesting that there is such a difference. The question will be at what point do we change the official komi based on the bot win rate prediction? I’m assuming that humans still play differently enough that our legacy komi makes sense but at some point that might not be true.

When komi includes a half-point, Go is no longer a futile game. Rather, one player should win even if both sides played perfectly.

There are not words for how strongly I disagree with the inherent assumptions behind these statements.

Oh dear. I believe that you misunderstood me. In game theory, a futile game is one that permits a draw or a tie when both players move optimally. I never meant that playing a game like that is futile. And then I mentioned the logical consequence of a game with half-point komi—that one of the perfect players should win.

Like you, I don’t endorse half-point komi just to have a winner in every game. After all, if I play perfectly, why should I lose sometimes?

Thank you for correcting my ignorance

I was not aware of the alternate meaning of futile game. Much obliged.