Read it many years ago. As relevant as ever: 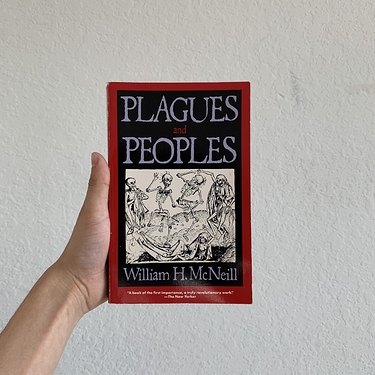 When some kids surfing is still on in a town when all other town activities are closed due to the coronavirus. Doesn’t this go against what we are standing for in the separation rules. I don’t see how it is necessary, while we can’t go to a park to do “unnecessary” exercise there.

I thought about it and I think it’s media fear-mongering again.

Yes, the articles talk about rise in pneumonia cases by ~2000 compared to previous year but in January. In January the virus was only getting out of China, I really doubt you can attribute these cases to coronavirus. I don’t think timeline-wise it makes sense to have thousands of cases in January already. (And by now that would mean hundreds of thousands of cases hid by the government which maybe would be noticeable). Is there really no other possible reason to have an increase in pneumonia cases?

I hope you are right 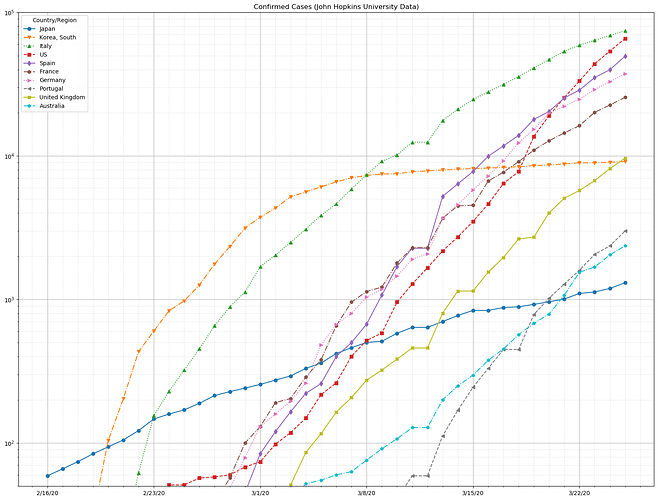 I put my code here

Plotting of COVID-19 Cases. Contribute to yewang/covid development by creating an account on GitHub.

The Financial Times are providing free coverage with nicer plotting

Coronavirus tracked: the latest figures as the pandemic spreads | Free to read

The countries affected, the number of deaths and the economic impact Assuming social distancing measures are maintained, what are the forecasted gaps in available health service resources and number of deaths from the COVID-19 pandemic for each state in the United States?

The US now has the most confirmed cases in the word. I wonder what and why they are doing so bad/wrong. We have to be home most of the time, so how does it still spread. I know there was also not enough testing in some areas too. That just contributed to the issue.

Shouldn’t others be able to at least somewhat make up for one person’s mistakes? Even if that one person is a president that I agree isn’t good. There is a governor for all 50 states. They could’ve helped the problem a little more if trump wasn’t doing enough.

Not when that person is the President.

Foreign policy and federal issues are on Trump. The decisions he makes can be stopped, delayed or modified, but the issue arises when he chooses to do nothing. There isn’t anyone that can take action on his behalf in these matters.

Next thing it’ll be “Covid-19 caused by Brexit”…

Well, I expect Americans know much more about Trump’s Corona policy than I do so I won’t milk the point.

We have to be home most of the time, so how does it still spread

Note that people don’t get ill immediately when they get infected. It will take a week or so for the infection to become noticable and serious enough to get tested.

So if you start strictly staying at home on last week Friday, the effects really should only become noticable around now.

Although it cannot be the case that everything can be blamed on a President, it can’t be denied that his advice for how to behave during the corona-crisis have been questionable at best, and dangerous at worst.

I’m neither on the left nor American.

Read the policies he’s signed off on, and watch the unedited press releases regarding COVID-19. You can also read today’s news about his desire to deploy the American military to do border security at the CAN/US border. Try to find out his motive behind doing so as it’s an interesting exercise.

The very first thing that caught my attention (regarding my close scrutiny and criticism of him) was when he pulled out of the JCPOA. There was no reason to do so, as Iran was following all restrictions according to the IAEA. What I assessed as his reason to withdraw was quite shocking if I do say so myself (it had nothing to do with the nuclear deal itself). After this event, I started closely following and reading his policies and maneuvers, and none has been as overtly bad as the COVID-19 response.

The fact that you’re now bringing up the Iran nuclear deal out of nowhere already reveals that your purpose was political.

Well, next time I won’t try to explain myself or my reasoning to you then. Nor will I give any background or context to why I would be more critical of someone.

I would have thought that if you were genuinely asking how I could blame Trump for this, you would want to understand by biases and background.

Oh, we had it in philosophy class. The role of individual in history or whatever. I like to think that in the end it comes down to team effort and not single individuals.

I wonder what and why they are doing so bad/wrong.

I am not interested in politics at all and we can leave them out of this discussion and still see some facts on the matter that might shed some light on your question.

One fact that there is no centralised position, no concensus nationally among the citizens according to the polls (and thus among the politicians too) that this is a serious issue.
So, since there is no clear demand for national measures, it is all left to the individual governors and mayors that might or might not take this seriously (or have the guts to take tough decisions)

Another fact is that there are cases where a state was declaring emergency and another state was still allowing holding parties in the beaches. I think that we can all agree that this was not a good idea. Logic decrees that a global crisis should require a global/national policy.

Now, if you take other known idiosyncrasies of the country and its inhabitants into account, things can get worse. For example, the country’s large primary system that demands the organisation of rallies, fundraising gatherings and conferences, as well as the actual going to the polls. It is a fact that both parties held some primaries even after the virus was declared a pandemic (March 17).

So, there is no need to argue politics when facts easily paint the picture of a non-cohesive response to the crisis all the way from the citizens to the higher-ups.

I’m not saying you specifically are implying that, but following the now non-hideable (sic) rise in cases in the US and the obvious fact that Trump doesn’t have even the minimum requirements to act like a president, I’ve seen Trump supporters basically asking “why don’t other people step up to cover up for the fact that Trump is incompetent?”. They just can’t accept that he is wrong, they think it is other people’s responsibility to make him look good. He is one person and can do enough damage, but hordes of delusional groupies is apocalyptic.

I used to think anti-vaxxers, flat-earthers, Trump supporters and other people who are so obviously wrong that blows the rest of us’ minds just needed some understanding and some guidance and they would see the light.

But I’ve now concluded that they are just selfish attention seekers who, in a very calculated manner, artificially convinced themselves to believe something wrong and also controversial just to feel special. They don’t care to be right, they don’t care about other people and they don’t care about anything else than them feeling unique, by acting like they’re wronged for not being applauded for being all flavors of stupid.

So, I’ve decided I’ll keep them at the furthest distance possible and watch them burn.

So, Trump supporters who drink chemical cleaners and die horribly? I’m sorry they died, but not sorry for them. Science was right there. Morons going out and about and dying from coronavirus alone in their apartments because “this is just a flu and an obvious plot to fund pharma companies?” I’m sorry they’ll die, but not for them. WHO recommendations were right there. Brainless people who hide their 6-year-olds in the trunk to circumvent quarantine rules (happened in Crete yesterday)? I’m sorry their kid almost suffocated and I hope it grows up to be a better person, but the parent is beyond saving. Common sense was right there.

We keep dismissing those kinds of people as stupid, but they are not; they are fully aware of the consequences and they just don’t care. They are malicious people and that’s that.

P.S. People are required to pay 30.000$ bills during a pandemic to not die and STILL American people don’t see the point of universal care, but yeah, the pandemic is an evil plot of the pharma companies.

Morons going out and about and dying from coronavirus alone in their apartments because “this is just a flu and an obvious plot to fund pharma companies?” I’m sorry they’ll die, but not for them.

I don’t have a problem with people bringing themselves into danger because of stupidity.

However, I do have a problem with people bringing others into danger because of stupidity. People who think “this is just a flu” spread the disease to others, who might not think it is a flu. If enough people do stupid things, our health systems will collapse.

“I’m not scared because I’m young and have a good immune system” → yeah, you [expletive], it’s not about you getting sick, it’s about the rest of the population. Stop being arrogant and selfish and just lock yourself inside, like any sane person would.