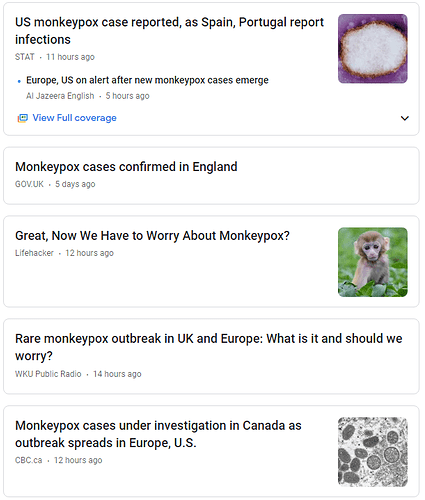 Nice, a new toy to keep us excited…

What is worrying me is that measures like washing hands or not coughing in your colleagues’ face tend to fade into inexistence. What’s wrong with washing hands, people?

No wonder a new illness came to visit and no doubt we’ll sc. do such a bad job in prevention that we will end up with martial laws, again.

Washing hands cannot hurt, but it’s pretty inefficient against covid. People were told two years ago to wash hands because masks and vaccines were not available and people don’t want to hear “there is nothing you can do against the virus”.

(Nigeria)
From 1 January to 30 April 2022, 46 suspected cases have been reported of which 15 were confirmed

On May 19, Italy confirmed its first case in a traveller who had arrived from the Canary Islands.

On May 20, Australia reported its first suspected case, in a man who fell ill after returning from travel in Europe. 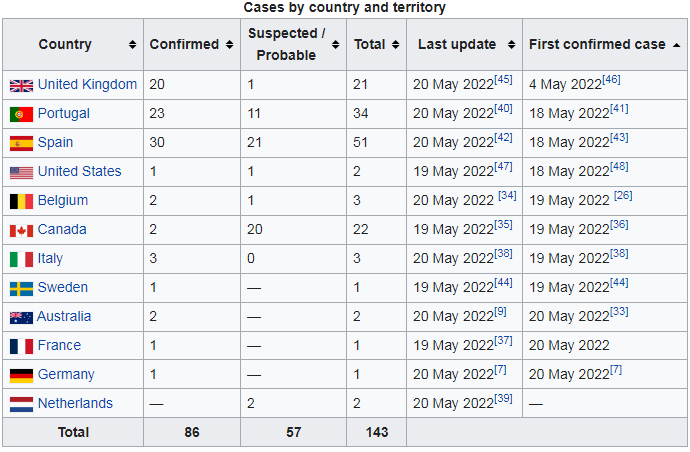 True, but it’s a good habit in general. So, if we are so ready to ditch the simplest, less tiresome habit, I don’t dare to think how fast we ditch the more serious protective measures.

Note: I didn’t say that washing hands is useless with regard to other diseases (like gasteroenteritis), I just said that it’s almost useless against covid. So yes, I agree that washing hands was a good habit that most people lost.

I remember that 2020 was reported to have barely any case of gastroenteritis at all. Apparently, the measures we took against covid that year completely stopped the usual seasonal epidemic of gastroenteritis from happening…
…and then in 2021 it was business as usual. Gastroenteritis was back, apparently we had already stopped washing hands.

This is one of many examples where I was really surprised by how quickly things went “back to normal” after the first wave of covid, with apparently no lessons learned.