Just had a 9x9 and I wanted to query a couple of things.

The first is that I was (given) lots of opportunities to capture single stones behind my lines and took them. Is this useful? or should I just have left them until they potentially became more threatening.

The second (and the main query). At the mid point in the game I could have captured four white stones to the left of the board by potentially sacrificing one. I didn’t bother because I thought they were dead stones anyway. But then I could not decide whether capturing them is more advantageous than leaving them to be removed as ‘dead’ when the scores are counted. Hence the question.

Game is here and it is not that elegant but you can see the white group to the left at end. 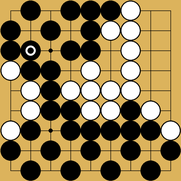 Thanks for any advise!

Japanese is the most common ruleset, which is what you played with here. Every stone you play inside your own territory costs you a point because your own stones don’t count, only empty territory and captures. So for best play, only play exactly as many stones as you need to either address their threat to your own group or prevent their group from making life.

In Chinese scoring, your captures don’t count but your stones do, so you can use as many stones as you want during up your boundaries and capturing invading stones as it makes no difference (as long as there are no other points of value on the board that you’re missing out on by playing inside your own territory)

So that says it does not matter either way. If I played 2 stones to capture I would lose 2 points and get 4 points captured (so +2 aggregate). Then at end of game I would get another four points for the empty points making +6 aggregate.

If I did not capture then at the end of the game those four stones would be dead providing four points and the two blank squares not filled taking them would also make +6 points.

If white, for some weird reason, dropped another stone in there then capturing would make sense as it would cost me 1 to capture 5 (+4) then giving an extra +5 at game end for +9 as opposed to +6…

If white, for some weird reason, dropped another stone in there then capturing would make sense as it would cost me 1 to capture 5 (+4) then giving an extra +5 at game end for +9 as opposed to +6…

No, you would just say “thank you very much for the extra point” as capturing would still cost you a point but waiting until the end of the game would not.

but dont captures increase my score by 1 by decreasing his score at the end?

Let me try to sumarrize.

As long as there are still any open borders or neutral points on the board. Playing a needless move in your territory always costs you something (regardless of ruleset).

The difference between rulests in this case is only cosmetical.

++ of course you lose any points you could have made by chosing a more profitable move.

The difference comes into play only once all borders are finished and dames (neutral points) filled.
Then playing inside your own territory does not matter under Chinese rules, while you still lose a point under Japanese.

Capturing anything that cannot connect out, make life (two eyes), or capture any of your stones is always a bad move - or rather can never be the best move. (the hard part of course is judging what can or cannot make life. That comes only with experience

This is the way I explain to beginners, maybe it helps:

First off, the white stone stranded in your area is your prisoner. You do not have to capture it, just mark it dead at the end of the game.

That is 27 points for black in this half of the board. I counted 2 points at the squares, where white stones used to be.

Now, rid yourself of the idea of “getting another N points”. Instead, think in exchanges. This works regardless of ruleset and forms useful thinking habits.

If white threatens your territory from the inside and you respond, the score is unchanged. Even if you do not see the threat, you should always respond just to be safe, since it costs you nothing. And there you go

Even if you do not see the threat, you should always respond just to be safe, since it costs you nothing.

Unless you’re losing by 0.5 and your opponent doesn’t realise that

Thanks everyone. I think my misunderstanding was that dead stones counted 1 whereas it looks like they count 2. This makes far more sense…

Unless you’re losing by 0.5 and your opponent doesn’t realise that

In that situation, the opponent should have stuck with the win instead of throwing me a point in the first place. The real solution is not to want the win that much and move on to more meaningful challenges

I think my misunderstanding was that dead stones counted 1 whereas it looks like they count 2.

When you take the stone as your prisoner (during or after the game), that is one point. The territory underneath the stone is the second point.