take a look at this game: 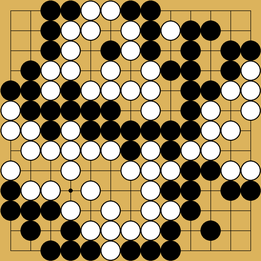 Obviously, Black got win. Why the right-bottom was NOT counted.

The automatic scoring doesn’t always work correctly. It is the responsibility for both players to mark dead groups and check territory BEFORE clicking “Accept game result”.

That would be a reasonable response for more complicated situations involving seki or large dead groups, but the bug in this particular game involved an extremely basic case: an empty region of territory surrounded only by black stones which all appear to be marked as alive. If the scoring algorithm doesn’t even properly count the territory for this very basic case, there seems to be a serious bug that needs to be fixed rather than just an edge case that can be dismissively ignored as the responsibility of the players.

Had the black stones been mistakenly judged to be dead, that could perhaps be understandable, since maybe one could just say that this was a life/death determination error, which could be fixed by marking those stones as alive. However, the black stones already appear to be marked as alive here. Why isn’t the territory that they are surrounding counted? More importantly, if one encounters this bug, how does one mark the empty space as territory to correct the count?

It seems that the OGS team is aware of this issue since they liked your post, but hopefully that “like” does not also mean that they are not further investigating this issue.

@anoek, @Franzisa, what would have been the proper way to have corrected this scoring issue?

The black stones surrounding the territory already seem to be marked as alive, but the territory just wasn’t counted for some reason? How does one mark that region as territory?

Why would you want to mark the intersections inside a dead group of stones as territory?

Why would you want to mark the intersections inside a dead group of stones as territory?

Load the game and look at the lower right. There are no dead stones on the area, it is only surrounded by alive black stones, but black is not given the points

That is interesting. This was using the automatic scoring? Why did black accept the score?

It’s reasonable all the time. There is no context in which making sure the game is scored correctly before accepting the score is NOT reasonable.

Moderator likes for Pempu’s post has nothing to do with awareness or not of the bug and we will not deny that is is a bug in the automatic scoring feature. However, OGS offers the tools with which to fix a problem like this. You have the option to remove the dead stones and mark territory manually if you don’t agree with the automatic scoring system.

There is no reason that black lost this game other than they weren’t paying attention when they accepted the score.

How does one mark the territory manually in this case? Maybe the black player had trouble figuring out how to do that? His surrounding stones are already marked as alive and there are no dead white stones within the territory to remove.

It seems that viking123 came across quite a severe bug, and I thought pempu’s was a bit unreasonalbe since it was dismissive of an underlying bug that probably shouldn’t be overlooked by the OGS team. Also, I don’t think viking123 was necessarily even asking for a score reversal, but just notifying of a severe bug.

What if you have a live game where some weird scoring bug that makes fixing the score seemingly impossible? If it couldn’t be resolved quickly by an online moderator and I had to go after waiting for a while, I would feel hesistant about leaving the site when the other player could just resume the game and cause me to time out. Would the moderators be willing to reverse a game that ended by timeout in that case?

So it looks like what happened (which isn’t immediately evident when you’re looking at the result after the fact, as the rendering doesn’t indicate this clearly in this case) is that the j1 cluster was marked as dead, thus making that whole corner down there contested. So the rendering engine should more clearly indicate this after a game is over, however I have confirmed that it does in fact indicate this correctly during the actual stone removal phase (if you fork the game and try it there it’s pretty obvious what’s happening).

So, summary, during the stone removal phase to correct the problem the users would have had to unmark the j1 stones as being dead.

And as a follow up, I’ve added it to the todo list to make sure dead stones are shown as having been removed even if those positions are not scored in the future, if for no other reason than to help avoid confusion after a game has been scored Those stones are actually marked seki. It’s this way because the system doesn’t want to count N13 as point because of Q15.
If clicking the stones mark them dead, another click should make them alive.

actually, it was not marked as seki… it get marked as territory for black, which is even stranger…

edit: ok, now when i reload the page i see it’s marked as seki… am now gonna make a check if the count adds up in that case,

edit again counting get’s me (seen the o14 group as seki) gives me black by 32.5, which, indicates that it has counted them as dead, but not as territory for black

Note that I was talking about the stone removal phase. The Score estimator works differently and doesn’t produce any guaranteed result.

well, ofc was I talking about the stone removal phase

Yeah, you’re right, the O14 group seems to be added to Black’s prisoners. Really shouldn’t do that.

me and flowing tried to reproduce the exact scenario, but we failed

thanks for the attention.