I was playing a game earlier today, and when we went to remove stones, the other player had a bug that wouldn’t allow him to accept. When I tried to “Cancel and resume game”, it displayed “Error resetting removed stones” or something like that. I couldn’t figure out what to do, so I resigned (I was losing, anyways).

Anyhow - you should try to fix that.

can you provide the link to the game in question? 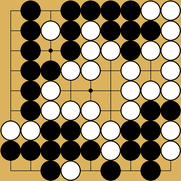 Ah, the game has been scored properly.

What happened here was the following: Your opponent had a bad internet connection and clicked on accept. The server took a bit to handle the request, and while doing that, you clicked resign.

Because the game was already being scored by the server, it sent out an error to you that resigning is not possible.