Hello OGS team(or others),
Today I was playing a 19 by 19 game, when me and my opponent came up against a bug. 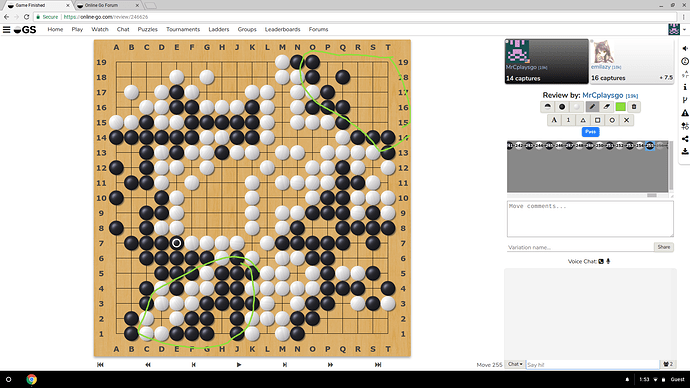 (don’t know if I you can see the screen shot, I will try to reply with it if you can’t)

Don’t know if this is a bug, or just an error of the score estimation program, but either way it might want to be looked into.
Thanks,
-MrC

After the game is finished both players need to agree on the status of all the groups (dead/alive). The computer is on occasion wrong. You can change the status of wrongly marked group by clicking on it or on the territory it surrounds. Your opponent then needs to confirm this change.

EDIT:
btw if you are talking about the score estimator and not the remove phace, then yeah the SE really is often way off, but to its credit it is hard to predict a game before it is finished. Computer cannot estimate what mistakes players will make etc. But you can click on groups in SE as well and it will recount.

SE was afraid for you justifiably. I put up some variations for you here: https://online-go.com/review/246638. Just to ilustrate that SE just really cant predict what you will play and I actually didn’t find a way for black to kill cleanly. (Not saying that there is none, I just didn’t find it in my quick review)

Thank you for the explanation. I will take a look at the variations as soon as I can.