I noticed a bug as a I organized a group tournament this week-end : sometimes, some players didn’t appear in the group’s chat even though there were connected (and even playing).
In 3 rounds of 16 players each, it happened twice (for two distinct players in two distinct rounds) so it seems rare but not exceptionnal.

To be precise, those two players didn’t appear in my chat (even if I refreshed the page) but did appear in other player’s chat…

Something’s fishy indeed. Koba is in spectators list but not online. 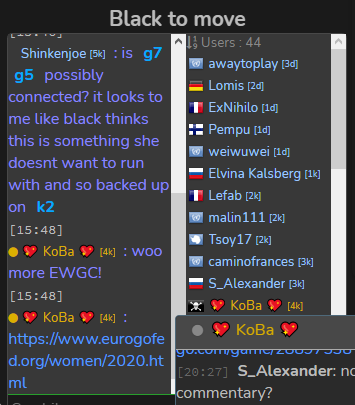 Moreover Koba is online and offline at the same time in two different browser tabs.

Am i causing some bug again? Dammit, wouldn’t be the first time >___<