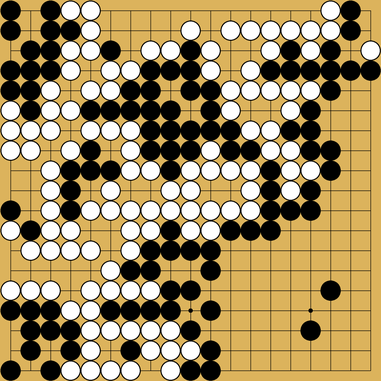 Waiting to know where I started to lose the game and where I could have fought back.

i think 60 is a bad move. trying to get out from lower left is hopeless, even if you can actually make it out alive.

maybe i will try to attack the 3 black at the top and try to secure the centre.

The fight in this lower left corner didn’t go well, you may reconsider your moves there (even before move 60).
Just playing sansan instead of trying to counter the invading stone in the corner would already give a better result, but I am not sure it would still be the optimal way.

Your way to play upper side seems ok as I feel b shoulder hit was too near your strength so all went logical there.

-I think you mishandled the top. Black got ton of territory in exchange for very little. Jumping into a pincer is usually a bad thing. Furthermore, the only reasonable follow up was to attack the floating black group on the top, which you never did. If you’re going to give up territory to separate/gain influence, think about how you’re going to capitalize on it. If you don’t capitalize, you’re giving up territory for nothing.

The game was over by move 70 or so. Black has way too much of both territory and influence for white to have any chance. Before making some major mistakes in the endgame, black was probably up by something like 80 points.