This is an idea that’s kinda similar to Thue-Morse Go, in that it makes the game more “fair” (with a definite reduction in komi requirement, and possibly reduced to 0), and can involve weird passes.

Ok, so imagine you have two go boards, but you only have one move to play between them, and the score for the total game is the combined score of both of the boards.
If the boards are the same size this is necessarily fair because any move b makes can be copied b w on the other board, creating two identical and opposite games.

Now, naturally it’s kinda boring if there’s a known (and simple) way to force a draw (unless you’re a better player trying to show your opponent when they play slow moves),
so clearly there has to be something to prevent that from happening, either each board has to have two different (but relatively equal-value) positions

Play it across two sizes.

Naturally the game will likely not be a guaranteed forced tie, but it would make it certainly very close and only require small bits of komi, while providing interesting possibilities. 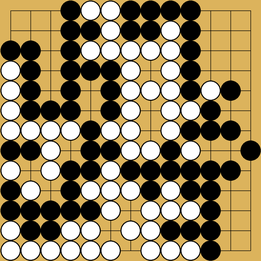 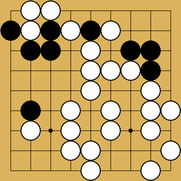 Unfortunately this doesn’t preserve moves between two boards, so this isn’t necessarily a complete record of the game, but you might notice some weird passes, and those are intentional: the player passing had tenukid to the other board and the other player eventually got sente (or thought they had it) to play back on that board.

But I think it allows for weird positions the same as Thue-Morse, but isn’t quite as strange to do live (and is even better in person as you don’t have pesky clocks and tab switching in the way)

and also is guaranteed to be more fair than a no-komi game, although black still probably has a slight (probably 1 or fractional-point) advantage
EDIT: apparently it’s not guaranteed, but it is likely to by of the form x-y (although this has an upper error bound of 2y, which would be the same as x+y)

very interesting idea! white can always force a draw when played with conventional rules and identical boards, which is a bother. smart of you to use different boards

. another way to break the tie would be to give a small komi (maybe even just 0.5) to black (supposedly the lower ranked player). in that case white would have to deviate at some point.

ultimately this is more of a (fun) variant of go to me. if it was only for the sake of “fairness” then the games could just as well be played in sequence right?

well yeah, it’s also for fun, and also because I’ve been spending way too much time with Combinatorial Game Theory and disjunctive sums.

I would argue black can force a draw, by passing the first move. If white passes, it is a draw since the game will be concluded with no points on the boards, and if white plays a move, black can mirror.

How is this different than just playing on a single, larger custom board? Maybe the specifics of how to implement ko/superko rules would still matter?

Imagine the goban is no longer just a square grid, but two disjoint square grids (possibly of different sizes). The two games can be simply thought of as one game, but played on a custom graph. Instead of viewing it as a pass in one of the games, it’s merely just a tenuki.

With two grids of different sizes (making mirroring impossible), I’m not sure that the first move advantage would actually be reduced.

In my mind two disjoint square grids is two boards, it’s just as far as I’m aware there is no custom board of that manner, and also doing so is the same of taking the disjunctive sum of two differently sized games of go.

I don’t have mathematical rigor to my conjecture about two boards reducing first move advantage, but my thinking is that the advantage for first move on any single board isn’t 1st-2nd, but 1st-2nd+3rd-4rth… until you reach N number of moves, and if there are moves of equivalent value then that allows some situations where An=An+1, which could possibly exacerbate this, but my conjecture is that it would diminish far more often than the reverse

But ofc heuristics like this for treating two games as numerical switches are not always accurate.

Ok, so while I have stated that, I feel the need to put a boundary of error on this.

First some notation, since I think it’ll be tricky for those not familiar.
anything written as G={GL|GR} is a game G where GL is another game that occurs if Left is the next to move and GR another game that occurs if R is the next to move
This is recursive and all non-loopy games must terminate at {|}, the game where nobody can move and (under normal play) the first to move in it loses. We call this 0, and go players probably know it best as jigo (where under Japanese rules if someone makes a move it hurts their score and they lose, and under old Chinese rules this will occur eventually once someone has to fill an eye)
Any game where the first player that moves loses can be put in canonical form as 0
There’s a whole thing about how it turns into numbers, but here we’ll just define numbers as the score of a game.
We’re gonna call Left Black, and Right White for the matters of this discussion
If B has a greater score than W, then the resulting number is positive, and if W has greater score, the resulting number is negative.
±X is a game of the form {X|-X} where X is a game that is greater than 0 where both players benefit by X to play there.
-ish means “infinitesimally shifted”
t(G) is the temperature of game G, it is hot if both players benefit from playing there, cold if they are punished for playing there (which happens iff G is a number), and tepid is when both players benefit infinitesimally from playing there. For example, t(±X)=X
cooling is a process of reducing the temperature of a game (and likewise helps find that temperature, and it is defined by Gt={GLt-t|GRt+t} as long as G is not a number, otherwise it is G
A game is in canonical form if it has no dominated or reversible options (and this explanation is getting long enough that I don’t feel like explaining these here)
A game is equitable iff t(G)>t(GL) and t(G)>t(GR)
And finally a disjunctive sum G+H = {GL+H, G+HL|GR+H, G+HR}, where the things separated by commas are options.

For further reading and Understanding I highly recommend the textbook Winning Ways for Your Mathematical Plays by Berkelamp, Conway, and Guy.

But what then about t(X)>y?
then if we take the game G+H={X±Y|±Y-X} and again don’t need to consider (G+H)LL or (G+H)RR, they will necessarily play in X, so it becomes {XR±Y|±Y-XR} (keep in mind -XR=-(XL)), which if t(XR)>y (which it must be because it’s equitable), then it becomes {XR+Y|-XR-Y}, which is ±(XR+Y) where the mean value of XR must be less than X but greater than 0, in which case the value of going first must be Y<XR+Y<X, and thus y<xR<x+y. We can discount the equivalent case, since that is certain to be of value y

So it’s not a guaranteed reduction of komi, but it seems likely.