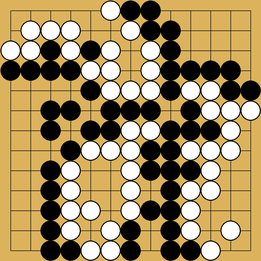 From Aproximately move 14.
In the beginning of the game I was very satisfied with my opening, getting two good corners and white´s 2 stones being rather trapped up there. But then I noticed that this huge white block was beginning to take shape, so I invaded with J3. I wonder if K3 would have been better?

J4 is, according to AI, maybe not so good. I thought it was a neccesary move, because after the contact play I couldn´t extend with a big jump to the left. So I´m not sure what else would have been good.

Then after white´s reply, I felt suddenly that my stones might be about to die, and even now I feel that they should have died. I had expected white to cut my horse jump to H6. If white had played J5 there, I suppose I would have let j3 and j4 die (treat them lightly) and then tried to connect to the top right group, Maybe that would have been good enouh.

The AI graph says that your position was never bad, but I understand that you felt the sequence was risky.

Other moves you could have considered: 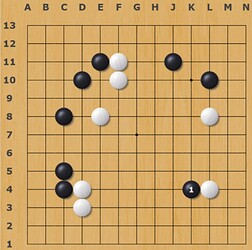 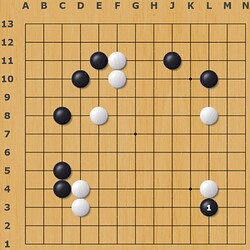 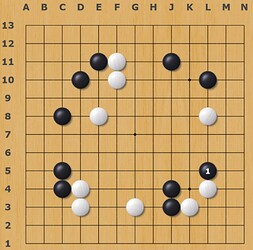 Some other (local) options: 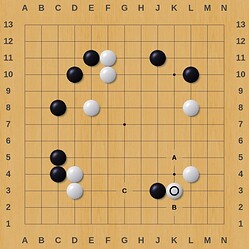 Put a variation in the game chat that focuses on reducing instead of invading (less risky).

Thanks for the comments.

The reduction is a nice idea, but I think the elephant eye that would appear could be used by White to reduce my territory.

The attachment moves are definitely a nice idea too, something I don´t do often enough I think.