Here’s a game I found in my 9x9 studies. Can you spot any mistakes? 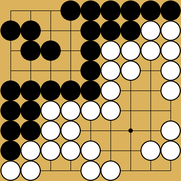 At move 4 I feel that w has a bit of better start already (maybe b keima is to restraint?), my own low level feeling but then maybe bored (?) Move 6 starts the fun, that’s already a strange move to me leading to difficulties. I guess at this point w didn’t need it but wanted to go for some experiment.

I have a doubt on b 11, maybe should block on the other side?

Lots of things that I don’t understand.

Two 1d players (at that time) so I assume they were playing far better than me!

C5 (black 5) is an “elephant jump” too easy to cut, but there’s no room to live separately.
I can understand white cutting at D4.

Is black 15 forced?
I would ladder D6 instead, so the black L would be safe. But would I then lose bottom right corner? Maybe…

After black 37 (B8) white has a dead shape on top left. Could white surround the black snake before black captures the corner? White 38 (B9) seems a useless move. I would instead atari B3, threatening to connect under and reducing liberties of the black snake.

And what’s black 39 (E9) for? Threatens left to make an eye?
White doesn’t respond locally but plays C4. Isn’t it slow?
Then white starts the capture race with G9. Black’s answer is H9… what? And then white connects instead of capture. WHAT???

At this point is seems to me that white can still win the capturing race. So black plays D9: a gote move that takes away one liberty of the black snake. Why?

White then attacks the bottom right corner. After black 53 (H4) where could he possibly make two eyes?
But then white plays C8!
It’s forcing, ok, and it’s sente, ok, but it reduces liberties that are necessary for the capture race!
White just killed all black groups and then makes a present to black committing suicide in the top left corner. He’s ahead anyway, so who cares? But I don’t understand…

White J5 and F1 just make sure that black’s dead. It is indeed. But black continues playing in that corner. Why? All following moves are irrelevant for me: black is alive on top, white on bottom and white’s territory is bigger. That’s it. So why play 40 more moves? You can’t cut a monkey jump. You can’t live with a bulky five or a 2x2 box. So why play all those forcing moves that lead to nowhere?

Well I just assume that there’s more than I can see, because both players are so stronger than me…

@lysnew Well, I don’t understand all moves too, but I hardly can call anything mistake here.

C5 may be unintuitive but it’s 9x9, you play moves that work, not the ones that look good. It can live separately with C7 or C6. And it did live, didn’t it.

Black 15 at least understandable, there’s a lot of holes in bottom-right for white to exploit.

White 38 is a must. Because otherwise A5 is atari-atari-capture. But yeah, the game is about capturing races.

Then it gets fuzzy for me. E9 can be to prevent white having ko shape there. Or it aims at D9. C4 probably just threatens to capture B3. H9 in general is good move to have because for white to approach at F9, they’ll need to fill in H7.

C8 probably doesn’t change anything in terms of liberties because black can always reduce the shape to four for free (B C8 W A8). No real reason to play C8 now though.

black is alive on top, white on bottom and white’s territory is bigger. That’s it. So why play 40 more moves?

If you look closely White E4 group has only one eye. That means white’s middle and black’s bottom-right is in capturing race and white’s only alive because they’re faster to capture. And in the end black loses only by couple of liberties. I’d play out this too just for the sake of aesthetics.

And it did live, didn’t it.

I thought it was dead, but it seems I have read badly the capture race.

Black 15 at least understandable, there’s a lot of holes in bottom-right for white to exploit.

Yes, but I feel weaker the “L” group, so I would fix it immediately.
I’m not saying it would be better: just my sensation.

white’s middle and black’s bottom-right is in capturing race … And in the end black loses only by couple of liberties.

Yes, now I understand many “strange” moves by black who was filling every liberty on top right and bottom left, forcing white to capture the big group.