I am a little surprised at this end of the game the estimator shows 30 points difference while my count is a close game. No complains. Counting is part of the game and we should not be aided anyway. 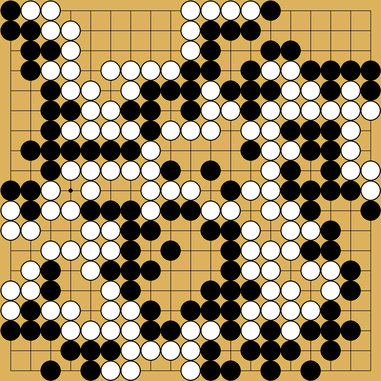 The OGS estimator always acts pretty cranky until the game is pretty much ready for scoring, and even then it acts up sometimes. You should get an accurate reading right before scoring (hopefully). You are absolutely correct about doing the counting yourself though, it is an important part of the game that I admittedly do not practice as much as I should. I personally think that after the estimator was “upgraded” it has not been very effective. Some problems were probably solved though. It is one of those projects that will just take some time. Again, good to see that you are doing the counting yourself, the estimator is just a tool that some would argue shouldn’t be used at all. Hope my long-winded rambling helps!

I recently finished a game where the estimator showed that I was ahead by a fair chunk of points, so I started to play simpler moves to end it quickly without any complications… well, turns out it was a much closer game than what I thought it was let’s just leave it at that

Yeah, I always use score estimator and then count myself to just see how wrong SE is.

Thanks. Good to know it is norm. I will not use it anymore.

I looked a litter further though. There are two corners that are live and the estimator does not assume they are, which is correct in my view. We don’t want a tool to help players to determine that. So the actual margin is smaller, maybe around 20.

For the record, the game ended up with 1.5 difference.