How many times suddenly your opponent play a move not in your books/josekipedias…
And worse you find that move far away from being easy to get some advantage of it.

I found if could be nice to collect them in a topic, hoping that some strong players could review them. Well, less strong are welcome to share their suggestions too.

Best would be moves you encounter in one of your own game (already finished ofc).

I propose we could first isolate it from the game and then eventually check how it was played in-game. so we can get the most of each. 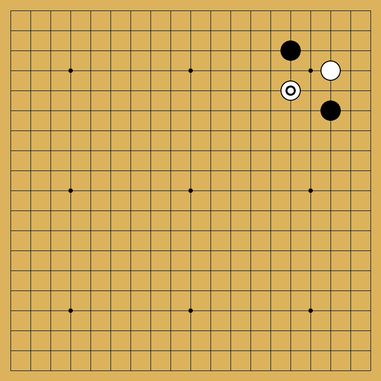 Good idea for a topic!

Seems like there’s two issues with white’s continuation:
1: The connection isn’t strong between the two stones
2: The move isn’t pressing for black.

I think black’s best continuation will depend on the surrounding area. If black is strong, then cutting and starting a fight seems logical. (Starting with Q16), maybe? Otherwise, I think black can dive into the corner either with R18 or the attachment at R17. The latter seems more like joseki sequences I’ve seen before, while the former avoids complications and gets ready to settle the other side.

Here’s one from one of my games: 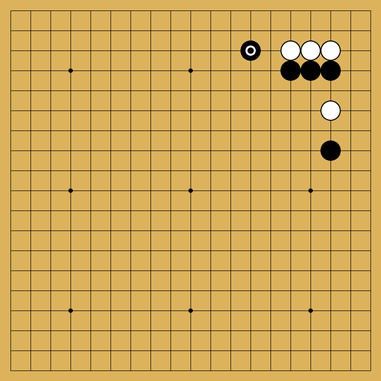 Usually black just extends, there. Playing the keima with a 2-stone wall is an awful blunder, of course, but I don’t think there’s a hard refutation for that move with three stones in black’s wall. My leela review post-game agreed. (According to leela, the move is around 3% worse than the normal joseki.) The biggest problem is the cut, of course, which the computer wants to start exploiting immediately. As white, I chose to hane at S16 to live in sente. That reduces the aji, but I’m alive and can choose my variation later as the board position evolves. Black doesn’t have any reasonable sente continuations.

Coming back on the first puzzle

It’s tempting to cut, but I didn’t find so efficient way to do it.
Besides this, there are 2 cuts possible and was already a bit of nightmare to decide which one
Maybe a better way is to tenuki the cut because b will be reluctant to connect, develop the sides (or reduce the eye space in the corner)?

Quick view (too quick maybe) it seems to me black can’t resist by cutting the w hane? if so b keima stone is more and less a waste

Btw I really hope stronger players as we are will come give us some enlightenment!

I suspect that if black plays tenuki in yours, white can respond and attack one of the black stones while fixing the cutting weakness. If black plays the cut, figure that white lives in the corner and black kills the outside, provided black has nearby strength. Either cut is reasonable, and the choice likely depends on which side has more nearby strength. Without local strength, it feels like an unnecessary fight, but black can just get strong locally, while white needs to fix at some point. If black scoops out the corner, white is running, regardless. The connection makes white heavier, so the cut doesn’t really matter.

For mine, white can definitely cut, but gets a weak group in the middle of black’s influence. Black’s got some forcing moves against the corner to reinforce the group on the side. It’s definitely viable, but is very much a fighting variation. (In the game, black also had additional stones on the top of the board, so the keima wasn’t as orphaned as it looks in the demo. I ended up crawling under it and monkey jumping to eliminate the territory there in the end game, since the cut didn’t end up mattering.)

@violaine I would play Q15, then both black groups look strong. The other cut sounds ok too. I would agree with @ckersch88 that tenuki is not a good idea, as white can press to indirectly protect the cut. Do you have a follow up sequence?

Sometimes a move is not considered joseki, but it doesn’t mean that there’s an immediate and direct refutation. The weakness just acts as a sword of Damocles, a permanent threat that blocks any initiative.

Here is the game 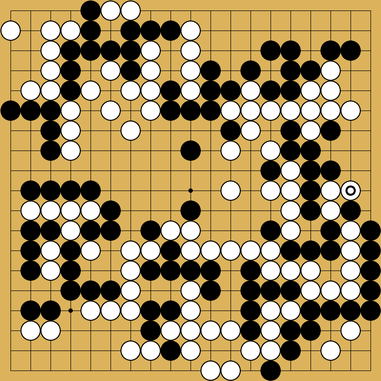 ok, just as expected :-). The later white atari is a bit dubious as it reinforces the black stone, but with the little white wall in the lower left it seems ok still.

True, I was quite annoyed by the peep+nobi I didn’t really expect it . I guess I should have played more leisurely ( simple extension?)

I’ll have another one but my game is not finished…
So if anyone have another surprising extended “joseki” please?