Thats so unfair for other people who didnt see it for most
He is 1d already, and still wining rank…

i reported him, but i prefer to post here as well, maybe the people who lost rank against can get it corrected too ^^
your thoughts on it please ^^

if you still dont believe 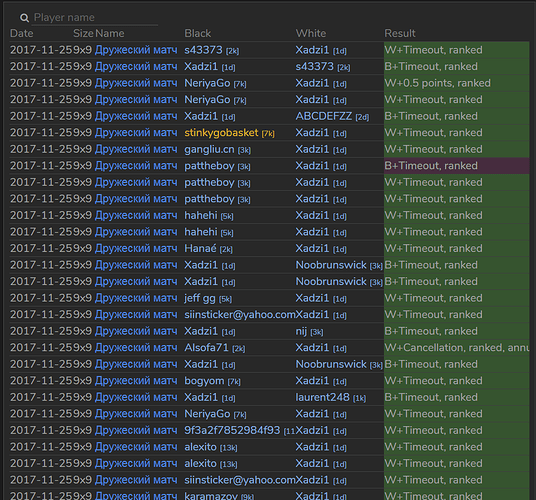 and the game i won against him today… no comment !! 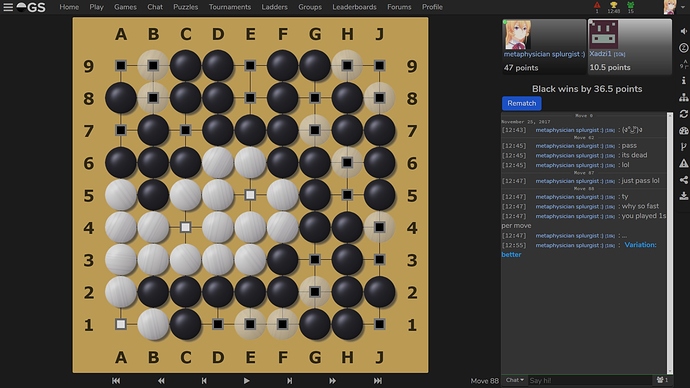 Hmmm, that player’s qualities are probably more on the speed side.

But if people want to play with such time limits (which I personally cannot understand), where is the problem? Do people just accept games without looking at the time limits?

I see that many people have played at least twice against this player. Why would they be doing that if they were unhappy?

well he is very unskilled, not even 20k.

i believe most people just didnt see the time

edit : and even on speed play his plays are very poor

he just wins because his opponents timeout

he wins BY TIMEOUT (not by score, nothing related to skill, he just makes his opponents timeout with ridiculous settings^^) > 95% of his games…

Does it make sense to allow 1 second per play? If not, what should be the proper, minimum setting for blitz? 5s? 10s?

i dont think the problem is blitz, people should be free to do whatever they want

edit : so i think time should be displayed in wide at the lobby of the game, so that people can cancel it (there is the 5 min neutral time that doesnt show time of the game until you start it)

can we upvote it so that its suggested at the devs ^^

he was hardly loosing, but won by timeout.
punish him !!

he wins BY TIMEOUT (not by score, nothing related to skill,

In blitz play, speed is just as big of a necessary skill set as anything else. Keep in mind, he has to keep up with his crazy time settings just as much as his opponent!

1s/move doesn’t has anything to do with Go skills.

And yet you lost to him in a game of go. I beg to differ with your conclusion.

I agree with BHydden.
Being good at Go isn’t just making the best moves, but it involves (usually) time management, manipulating your opponent, and maintaining awareness.
While this is, indeed, an underhanded trick, it does not break any rules and creates a situation where it is easy for the trickster to beat less aware players, although it is not absolutely sure that he will win.
Consider this an exercise in awareness.

@BHydden @mekriff
The only thing 1s/move really says is. who can klick faster in a random pattern and/or who has the better/more stable connection.
It has nothing to do with time management, and even less with a game of GO

I agree. Imagine having a 1s rule in a real life game of Go. Doesn’t make any sense…

Where did I ever say that they aren’t allowed ?

edit:
do not misunderstand me. I do not mind people playing as they like.
I just stated my opinion about this particular gamestyle.

Who are you to say they aren’t allowed to play

I believe he/she is a go player, and I am one too. Whether they do it willingly or not, those people are participating in a scheme to falsify the ranking system. The issue is not so much that those people are tricked, but rather that the winner can then use his/her fake rank to trick other people who have faith in the system.

he is very very unskilled ^^ fast or slow his moves are very poor, he is 20k at best really

what was weird is he played 1s per move while he had time, very poor quality moves, so i was curious until i saw the truth !

also its not people’s fault, when we play go we assume our opponent is gonna be respectful, especially if he has a (fake) high rank, in 100 games 80 people wont look, its just a waste of energy.

He is clearly guilty for wining by time out with 0 skill, not only one or 2 games, but basically ALL his games, oh and btw he is 1 dan … oh sorry 2 dan now ! only on 9x9 timeout… , dont put the blame on innocent people

and be fair ^^ whats not forbidden is not always ethical !!

I suggested that time settings are visible in lobby so that game can be cancelled, see my post earlier

okay, I thought you were going to ban 1s/move, but making it visible in the lobby is something I can get behind.

just look at our game !! he didnt even know when to pass lol