Feedback on the new OGS interface

Hi there. The new interface (implemented just yesterday?) looks very nice. Some feedback on the design:

For me there are 2 stepbacks:

I agree with Slsaimon on part 1. I can partly understand the decision to promote open challenges to the overview page, but in my opinion you should at least move it to the bottom of the page with active games on top.

I really dislike the new interface as it is for now. The previous one was very light and pure. Now it feels like being on an Apollo mission. Too many buttons, no room to breathe. It is somewhat oppressive.

All this, for a lighter feel of the interface.

Just played first game on the new interface. Unranked, Fischer timing, no handi. When the game finished, we marked the dead stones. Opponent seemed to work OK as a green tick appeared. I clicked on Accept but no green tick

Update : just played my second game, same settings. this one did not have the problem at the end. Only difference was I clicked “Accept dead stones” before my opponent this time. Difficult to solve a bug when it is not repeatable so I guess this is not serious.

Side note : the final score in my first game was correct in the game library even though it didn’t finish properly.

Now we can’t navigate through previous moves for games where analysis is not allowed.
I’m assuming this is not intended…

You are right about the retractable menu. Thank you.

I was expecting the board to slide on the left as well when you retract the menu, though.

One little thing that I miss at the moment is that the page titles are all the same now no matter what (just “The best place to play go online!”). Before, I could have several correspondence games open in their own tabs, so I could tell from a glance what the state of the games were (“Black/White to move” or “Your Move”).

Looks good but seems clunky. This morning I was excited to look at the new arrangements but never got to it. I started to answer moves and then nothing happened. I discovered that I had to hit refresh or go back to My Game to switch to the next game. I am playing on an iPad but that shouldn’t make any difference should it.

I really don’t want to sound pessimistic, but with yesterdays changes I think this site went from being one of the neatest, most inviting sites I have ever used, to a regular eyesore.

Specifically, I highly agree with Poutror’s points 4 and 5. Additionally, I really dislike the layout of the open challenges section, and I disapprove of something as basic as the new color on the button that takes you to the next game where it’s your move.

I’m trying to tell myself that it’s a matter of getting used to it, but I fell in love with the old design instantly when I first laid eyes on it, and I really can’t put a finger on a single change that I like.

Edit: My first thought when I saw the new changes for the very first time was that something was seriously broken, like a CSS style sheet gone missing or something. That’s a bad first reaction.

I have to disagree with point 1) here. The new design feels fresh and a lot lighter then the old, clumsy design choice. The old UI was a pain to use and while it looked better then your avarage Go website from the 90s, it still lacked any modern appeal. The new UI might not be 100% perfect yet, but in my opinion it’s a lot better looking then that last version.

My 5cents worth: I like the new interface and found it easy to navigate, easier than the last interface. Thanks to the Team.

Exactly this… I’m usually playing too many games at the same time and with somewhat long time passed after my last move, not being able to see what my last move (and therefore my general intention) was can be a deal breaker for me.

I agree with the OP’s post about the analysis mode. It has become cumbersome to enter analysis mode because now you have to go into a side menu.

Also, when in analysis mode you also can’t move back and forth between moves easily (back and forth arrows are gone), and you can’t reset the board to the present conditions easily either. Please bring back these buttons!

I’m going to use this thread to add my experience here, instead of opening another “New OGS thoughts” post. I’ll try my best to list the things I found buggy on an Android phone with Chrome. Some of it may be phone specific, some may be common to all platforms.

1 Board shows up at the bottom
This happens when I click on notification number or in the game icon at my game’s list. If I refesh the page, the board shows correctly at the top. 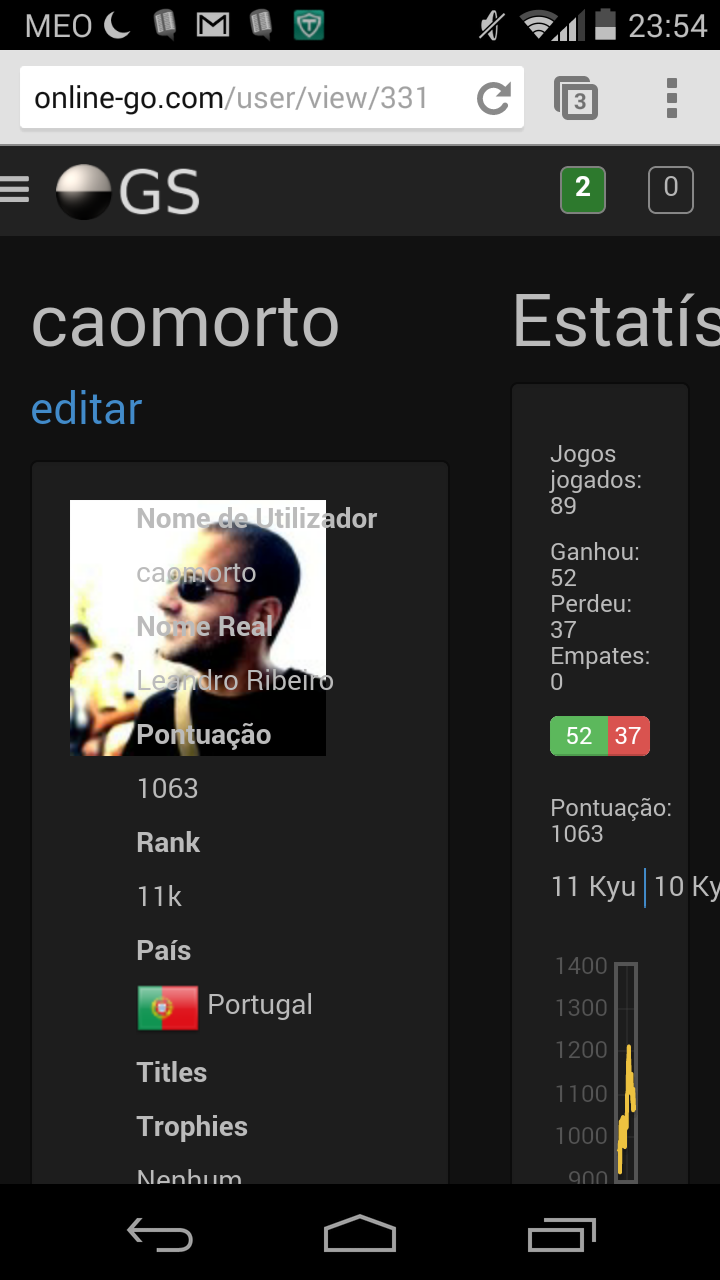 3 Blank page after login
When I login through Facebook, I get a blank screen at the address: http://online-go.com/login/#=

4 Left sidebar is hard to call
I find it very hard to click on the three bars that call the left sidebar. It is sometimes unresponsive.

**5 Open challenges at the top **
Plus one on making it optional. I never used it and I don’t plan to. At the computer it doesn’t bother me, but at the phone it fills almost all my screen space.

**7 Group forums **
I liked that groups had forums. I realized they now don’t because I wanted to leave a message to a group and couldn’t find a way. Will there be one? That kind of reduces the utility of a group.