My GF and I just finished our first game. White played last. We think that there are no meaningful moves left. Who won black or white? Why? Thank you! 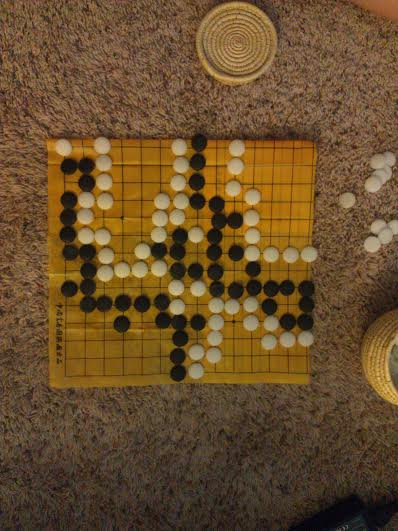 There are a few moves that need to be played:

We don’t know enough to be sure of the final score, but I think the winner is clear. White wins.

Allowing the center white and the upper blacks stones to connect, leaves the following:
I get 26 territory for Black and 52 territory for White. I didn’t count the difference in the remaining stones, but I don’t think there are enough to make up the 26 stone deficit. From the shown position, Black could get at most 3 more points of territory (29 total), but that would still not be close to White (still 52).

Second, Traveller makes a good point that it’s not done yet. To elaborate a bit more, if white plays at the top, one space from the left, it puts black in atari and black must connect those three stones, filling in a point. Alternatively, black can capture that white stone in the top left if it’s black’s turn. In the middle, there’s that one white stone almost surrounded by black. If black plays above it, sealing it in, then it’s dead and a point for black in addition to the extra few points of territory. If white connects it to the rest of the white group, it lives and that territory stays neutral.

I think I see what you are saying now that it is pointed out to me. Thanks!