Hi all. Over the past few months i’ve been bitten by the bug of Go. I played a bit as a teenager but that was over a decade ago. anyway since picking it up i’ve watched a ton of Nick Sibicky and Dwyrin youtube video’s and done some tsumego. This got me to the DDK SDK barrier at 9 kyu now.

And at this point i am getting a bit stuck. I try to review my own games but i just don’t see the glaring mistakes that i saw when i was playing at 12 - 13 kyu etc. Thus, i am asking you for help. I just played a really close 0.5 lost game that i think would be great for review, as it will probably expose my weaknesses: 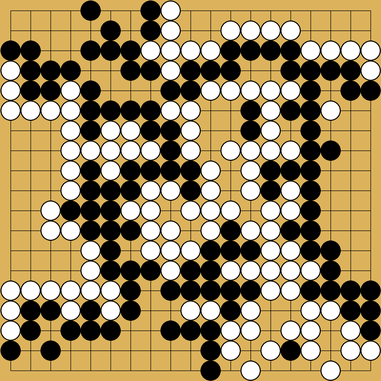 I would be glad with any comments or things that i should work on, but i have a few things that stood out to me in this game to maybe guide what i am thinking:

made own review with thoughts and questions but it is a bit rambling on. 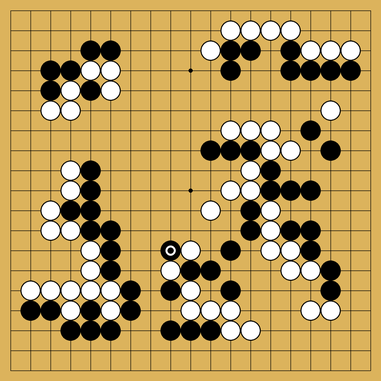 After a quick look:

Thank you for the suggestions!

Looking after my shape is a great observation. i had not recognized the proverb of hane at the head of 2 stones with moves 61 and 89. i only really think of this when it’s two walls adjacent and pushing along, but in this case the result is the same in a reversed order of moves.

The Q12 move my reasoning was to make a table shape with the formation O10, O11, Q12, Q10. so i was thinking about shape but i just completely didn’t register i was making an empty triangle…
In hindsight maybe a bamboo joint would be good shape here by playing Q11 instead?

M16 i played because i felt like i needed something defensive there to defend the weak point at O17. Maybe it’s not necessary at all to make an extra defensive move there, i have a habit of doing that and being a bit too defensive. because of the bad shape i made it is a problem area so instead of N17 playing M16 directly might have been a way better result? don’t know if i even need another move then to defend.

Move 147: Thanks for this, is this another instance of being to paranoid / defensive? I remember being slightly spooked about the cut at G6, G3 and running out the stones with J4. i couldn’t read it out so i figured i will fix a cut and not have to worry about it anymore.

Endgame: yea that needs work, i’ve been burned before when i do not immediately respond to my opponents moves so i sort of follow them around the board too much.

again: thanks! looking back at the game again with your comments i see a lot of things to improve on and be mindful of in my next games. Shape most of all

In hindsight maybe a bamboo joint would be good shape here by playing Q11 instead?

It seems you want to protect the two stones O11 but I don’t think they need protection. Giving yourself bad shape with O10-O11 would have made sense if you would cut at N12 afterwards. The question is whether you want to start a fight.

In hindsight maybe a bamboo joint would be good shape here by playing Q11 instead?

My understanding is the shape here is M15.

But because of the white X at O9, sealing white here is not big at all in my opinion. I would just tenuki and think about lower right reduce or left side reduce or even invasion. A two space extension at J17 is probably also bigger than M15. I don’t know. I am sure though the empty triangle is bad.

There is no critical live or death here, so a crude move like this should never be played. 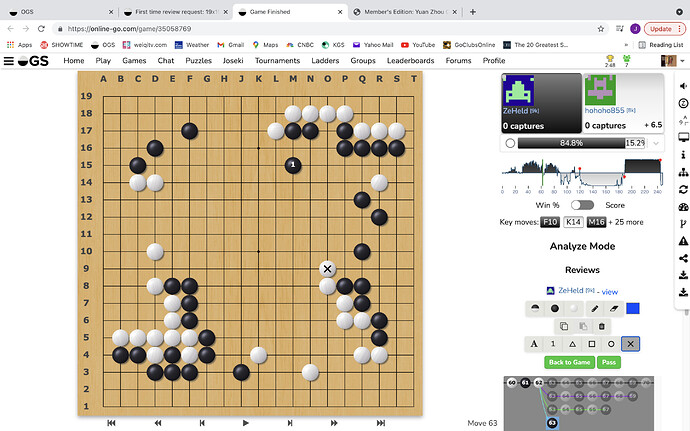 @ZeHeld was talking about this position, and I suggested to cut at A. 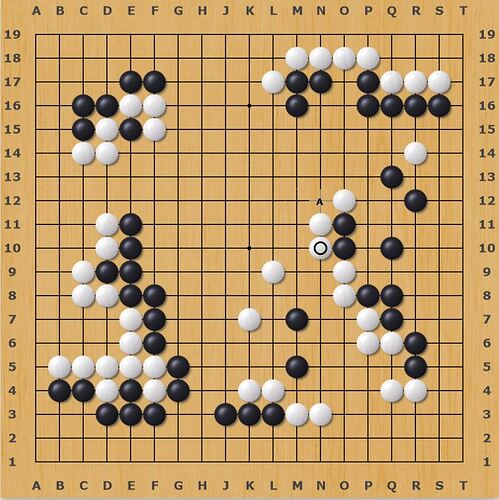 Got it, have to cut at A locally.

However, are the two black stones surrounded really dead then?

Thanks for the discussion.

I did not seriously consider the cut at A, opting to play defensive. I am never sure when to take a fight, is there a way to improve at judging that? Just experience?

Reviewing the suggested cut at A, it is complex for me to determine the best way to play for both sides. but what i could come up with was (very) favorable for black.

PS. even without the cut at A, i think the two stones could have simply escaped by attaching at K6 and threatening the cut at M4. 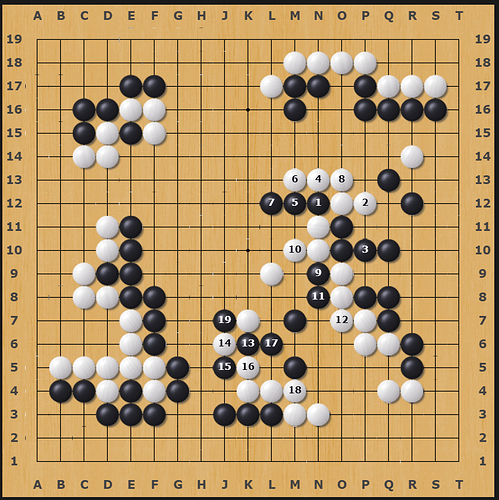 You leanr to fight by fighting… It’s not always easy to judge but in the present situation, we can guess that the fight is favorable to Black because Black has a strong wall at P16, and the weak group N12 can escape towards E11. But that’s just a guess, we can’t read every variation…

I think the sequence in that screen shot contains several mistakes by white. When attempting to read long sequences, it is important to not fall into the trap of self-indulgent reading (katteyomi).

Yep. Reading not the best, i get burned by that sometimes. I try to practice by solving some tsumego problems regularly.

I’ll keep working on all these points and let’s see how it progresses. Thank you