Frustrated trying to get started

I’m sure others have asked but I couldn’t find relevant posts. I’m brand new, trying to play a novice level game against the computer, but it’s not working. First couple times I got tired of waiting for the computer to start so I gave up. And just now, the computer (I think it was a computer) started quick enough but my pieces did not appear where I indicated. It’s pretty frustrating for someone just trying to learn.

That does sound unusual. Apart from my usual plug of saying when you’re first learning it’s usually recommend to play people rather that bots, could you share some more info about what OS and browser you’re using? Maybe a picture of what you mean by stones not going where you place them?

Screen recording or it didn’t happen.

what OS and browser you’re using

Yes, operation system (and version) and browser (ditto) are essential for troubleshooting

Yup, one screenshot can say more that a thousand words

I’m not sure exactly what the operating system is… I can barely figure out how to respond when I can’t see what I’m typing!

But, I use my phone, a Samsung Galaxy, & the browser is Puffin. I do know how to take a screenshot, but how can I take a shot showing my finger touching the screen in one place, then the stone (actually two or three at once) appearing somewhere else? I come from a very rural background, no plumbing, & for much of my life no electricity. I’m very good with horses, not so good with electronics.

Smurf, I realize that comment is normal in the cyber world, & from what I gather it’s nothing to get excited about. But, just a little friendly FYI… If you ever find yourself in a rural environment in the western states & you question a man’s integrity like that, you will get dropped in a heartbeat.

BHydden, I’m reluctant to play an actual person until I get at least a basic understanding of the moves of the game. Not to mention that after playing a few times against an app I installed & just not understanding what the heck’s going on at all… Well, I’d at least like to be able to score 4 or 5 points before letting someone see me struggle!

Indeed, it’s just a tongue-in-cheek way to say that photographic evidence, even better, a screen recording would be more helpful than your text alone. Responding to that with a death threat by proxy is hardly the sign of a civilized man and ironically, much less one of integrity, don’t you think?

Though I suppose the only kind of “tongue-in-cheek” this rural western states man you’re hinting at would know of has very little to do with a playful comment.

An Operating System is the software that makes a computer (desktop, laptop, smartphone, tablet) work, it is the common ground of the device, the base on which applications run. We say “does it run under Windows?” (from Microsoft), or “no, only on macOS” (Apple), or iOS (iPhone, iPad), or some flavour of Android (from Google) (which is probably what your Samsung thingie runs).

I’d at least like to be able to score 4 or 5 points before letting someone see me struggle!

I wouldn’t worry about that … we’re all kinda struggling, and it can also happen that one wins against a stronger player or looses against a weaker one.
(For example, when I play weaker players while giving them appropriate handicap you can often see me struggle

And @smurph, please remember that not everybody we meet here is used to our sharp-tongued computer lingo … and being told that in some places on the world one could get problems for such a remark is NOT a death threat, not even by proxy, it is friendly information.

However, “not a sign of a civilized man” and questioning ones integrity could definitely be interpreted as quite rude. Much the more after @lang.yan explained that they come from a rural area and are not too computer-savvy.

Hint: Use of Emoji, for example like this: “JPGs or it didn’t happen!

” make it a LOT easier to understand the underlying vibrations of a message. (I need to remind myself also!)

FWIW, I have been offended and/or irritated on numerous times by smurph’s sense of humour. Somehow he manages to chose the abrasive way of responding “humorously” quite regularly. Something to be aware of (him and the rest of us).

Having seen it enough times, I can recognise that offense is not intended.

If you ever find yourself in a rural environment in the western states & you question a man’s integrity like that, you will get dropped in a heartbeat.

It’s seems worth noting that we aren’t in the western states, we are in the online environment.

It appears that you are the one who is currently in foreign parts.

When in foreign parts its advisable to not leap to conclusions about foreign ways. For example, your integrity was not questioned, and you look silly asserting that it was.

I simply stated a fact, smurf. You acting like a little bitch shows what you are though.

… and in an online environment, personal attacks like this are unacceptable.

but my pieces did not appear where I indicated

I want to make a guess about what’s happening, considering you’re playing on a phone. You push the screen at a certain position on the board, but the stone appears on a different place. My guess is that your phone registers the place wrong while you’re lifting up your finger (or it might be the touch screen itself malfunctioning). Since it’s a live game you played, it probably fixes your stone immediately after having played it, hence you play the wrong move.

If I guessed right, then there’s a way you can prevent this: in the settings there is the option of Live game submit mode, probably set to one-click to move. 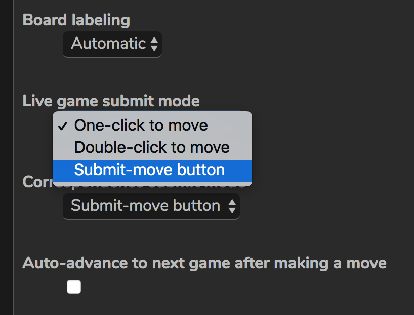 Change this to Submit-move button, then you will get a chance to play the stone first, check if it’s in the right place and then submit it afterwards with a button.

Another solution would be to get a pointy stylus pen instead of using unwieldy chubby fingers.

then the stone (actually two or three at once) appearing somewhere else?

It could be that my guess is wrong, based on this comment, though. In that case a video of what’s happening would be the most useful indeed.

Also, I see that your first game had simple timesetting, but that seems to be slightly buggy. I recommend playing with byo-yomi instead (no main time, 1 period byo-yomi of 1 minute behaves exactly as simple time settings with 1 minute should).

or it didn’t happen.

@GreenAsJade this is the part that questions his integrity. Time was a man’s word was enough. This statement (although I understand it’s context in an online environment) is basically saying “if you can’t prove this happened, then I don’t believe you” which implies that the person being addressed cannot simply be taken at his word.
I would caution you both going forward that if a man says his integrity has been challenged, don’t try and tell him he’s wrong. Smurph was acting like a little bitch by jumping straight to death threats and I don’t think you help him any by excusing his poor choice of words as just “his sense of humour”

I personally find that people on the internet take way too much offence over just about anything.

I’m on smurph’s side that “getting dropped in a heartbeat” is a little intimidating as a reaction to a “pics or it didn’t happen”, a common phrase (which lang.yan even acknowledges is not to be taken seriously on the internet) that (in my humble opinion) clearly is meant jokingly.
However smurph’s second post is quite provocative and does in fact question integrity in a direct manner. But then again, calling people little bitches is definitely a no-go as well. So both parties are saying things they shouldn’t?

Is it really worth discussing who got offended and why the reason of offence is valid or not? I suggest keeping the topic on point and talk about the actual problem of weird stone behaviour.

is basically saying “if you can’t prove this happened, then I don’t believe you”

It’s an idiom. It doesn’t mean that, even though the words say that.

It just says “seeing the pictures will be useful”.

“used to request a picture of a reported event”

Also, it was the OP, not smurph, who started talking about dropping people, as well as the little bitch taunt.

the browser is Puffin

Well, I’m not a phone UX expert, but maybe this is a problem? If I understand correctly Puffin is a little unorthodox. So I’d simply recommend using a different browser for OGS or trying the experimental native client https://forums.online-go.com/t/are-you-a-developer-want-ogs-on-a-mobile-device

it was the OP, not smurph, who started talking about dropping people, as well as the little bitch taunt.

• he’s not a knowledgeable computer user, and …
• he also explained that he lives in a rural area and advises (some off-topic chitter-chatter, if you want) not to talk that way IF one goes to such places … his remark about “getting dropped” is NOT a death threat …

How hard is this to understand?

I’m not clear why we’re defending a person who calls another person “a little bitch”, and who wanders in as a self-proclaimed foreigner, and yet starts taking offence at things that aren’t actually offensive in this environment.

Sure - it’s nice to help new people, goodness knows I do my bit there, right?

I’m usually with the first to leap in and say “how can we help?”

It’s even acknowledged (by me and smurph by his like) that smurph’s response can be seen as abrasive humour.

But the point is it was not offensive, and the OP totally over-reacted. That’s not appropriate, and all that’s happening is that this is being pointed out.

his remark about “getting dropped” is NOT a death threat …

you might note that I never said it was a death threat - I was careful not to say that. Even smurph’s description of it that way is hyperbole, and he qualifies it by saying “by proxy”. Which is true.

The point is that the OP totally overreacted, and started a personal insults fight. That’s simply not acceptable, especially from someone looking for help.

I also think this meta conversation belongs outside the thread. I’ve flagged my own post and the previous one for moderation - ideally removal to a different place to resolve.