Hi everyone!
I’m Marco, from Rome, and passionated about boardgames, especially abstract ones.
I also like to design new games and work on their mechanics.

I recently learned go’s rules and I was wondering something about the rules.

Please consider that is just a speculation, I don’t think it would happen in real tournaments.

Consider then two players that PURPOSELY WANT TO PUT THE GAME IN LOOP.
We don’t know why they would act like this, just consider they came up with this idea and they want to do it.

In the situation of the attached picture, it is white to move. 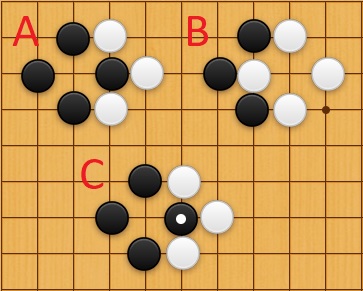 The game proceeds through the following steps:

Remember this is just a mental speculation about game mechanics, for fun!

I’m curious to know if there’s a rule that would prevent this.

Thank you and have a nice day

Do the rules allow this kind of play?

No. This is called a ko.

Ah, thank you!!! I read again the ko rule and I realized I misread it, thank you!

Sensei's Library, page: Triple Ko, keywords: Ko, Rules. SL is a large WikiWikiWeb about the game of Go (Baduk, Weiqi). It's a collaboration and community site. Everyone can add comments or edit pages.

It can and has happened in professional games for instance

A lot of games end with no result when neither player wants to stop capturing the kos when there’s 3+ kos. 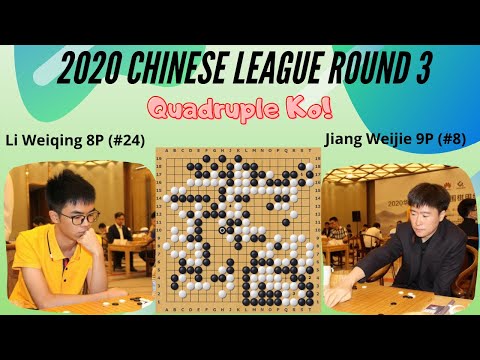 I’m Marco, from Rome, and passionated about boardgames, especially abstract ones.

Rome has a very nice go club.
Do you know them?

Do the rules allow this kind of play?

Under Japanese rules, cycles are allowed to happen, however, if both players refuse to break the cycle, the game can end with a “no result”, which is not quite like a draw, since a tournament should technically treat it as a game that did not happen and require a replay to determine a result.

Here is a Sensei’s article page that catalogs a lot of cyclical patterns: Cycle at Sensei's Library

Note that there are some cyclical patterns that should not (reasonably) end with a “no result”, such as Sending two, returning one at Sensei's Library, since the captures are unbalanced allowing one player to eventually abandon the cycle and still win.

For other rulesets, like Chinese, AGA, New Zealand, some form of superko rule is applied. This basically forbids cyclical patterns from arising in the first place (which forces players to find ko threats).

Hey welcome in our corner of the go world! It’s nice that you discovered by yourself the ko situation.
I hope you keep interest in this game and have opportunities to play.
There are friendly go players in Roma, and some of them come here to play too!

Note that, assuming both players are trying to win, and not just trying to prolong the game for no reason, the triple ko is only an issue if it really has value, for instance if it’s part of a liberty race. This does happen sometimes but it’s pretty rare.

If those are three independent ko for one point each at the end of the game, then the player who is ahead in points will simply finish one of the ko by connecting, refusing to play the cycle. This happens in almost every 19x19 game.

Thank you very much for all your answers!