Game not registered on my profile

I noticed that the game I played October 15 did not register on the bar graph on my profile page. The games on the 14th and 16th register, but not the one on the 15th. I was not annulled.

Could that be corrected?
Thank You!

Had a close look at @Mogadeet’s profile and I believe I can confirm his findings. It indeed seems there is an unrepresented game in his rating graph.

pinging @anoek any idea why a resigned game wouldn’t show up in the rating graph? (yes i looked closely to make sure it wasn’t hidden in a batch)

Are we talking about the rating graph or the win/loss bars?

The rating graph definitely has a point for Oct 15:

There’s a tentative bug report for the win/loss bars: https://github.com/online-go/online-go.com/issues/466

If it is, can you help with a detailed explanation of what you can see and what it should be?

Oh! I read the original description, and zoomed straight in on the 15th

It is definitely in the line graph. The colored-bar graph below, I’m not sure how to read.
The game in question is also listed in my game history (which is why I knew it was missing).

When moving the mouse over the line graph (where it highlights the game day with a red dot and notes the date in a pop-up balloon), it registers October 14 and October 16, but no October 15. 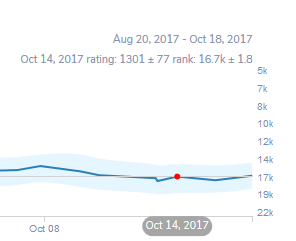 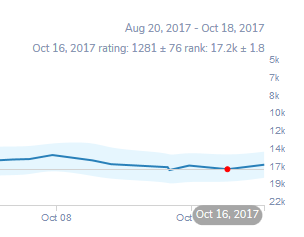 Here’s the games in my game history, including the October 15th game that is not showing up.

I suspect this might have something to do with time zones. We can all see that a game is missing, and it’s the same game, but we’re seeing different dates for when it was played.

Regardless of time zones, the missing game needs to be “found.” Can this be done?

Well, finding it starts with understanding what’s really going on

The timezone thing was a useful step forwards.

The next thing is to stare at it and work out whether the game in question has been grouped into a daily ranking data point on one of the days.

Because there is only one point on the graph per “day”.

Now we know that we need to consider where the boundary of the “day” is, in this instance.

I checked that already GaJ all the surrounding points are one game groups. There is certainly a missing win, which is why I pinged anoek earlier

My wife makes the best peanut butter fudge in the world. We can use that to bribe somebody.

The way these things go, I expect that anoek or similar will get to it in due course. You probably would be well advised to submit a bug report here to improve visibility, and make sure all the right information is there and the right people are looking at it:

It’s probably a “back end” thing, so us volunteers are limited in what we can do.

How do I report a bug? I tried that OGS Issues Tracker link in your post, but when I tried to put in a new issue it gave me a popup in order to create an account. I put in my user name and it refused it, saying it was already taken (which it is here on the OGS site).

If you do make a bug report it might help to include a link to this discussion.

As soon as I find out how to make a bug report I will do that.

For reference, bug is abailable at https://github.com/online-go/online-go.com/issues/490

Thanks to everyone. I appreciate it.