Hello I would like to know if I could have won (I’m black) if I did sacrifice the stone and played at p5 on move 128. Also ani other advices are appreciated, thank you. 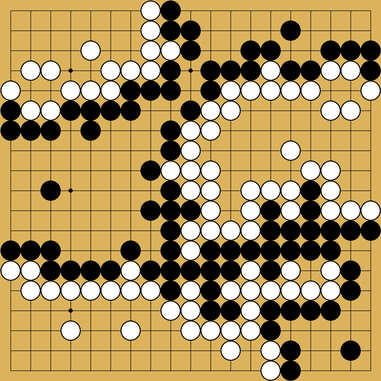 You sacrificed the wrong stone unfortunately, as that gave you opponent a way to trash your territory. It could have been avoided easily, although at that point in the game it was still a close match. However, I think much earlier you had an advantage and could have stayed ahead but this will only come with practice so don’t worry about it. I think you played a pretty good game overall and I like that you took the time to defend some of your weak points.

Some tips for you: learn to identify big points and get to them before your opponent does. Keep it simple for now while you are learning, this will help you on the long run to understand why some ‘simple’ moves are effective and when can you risk a more complex attack or play elsewhere.

Thank you @ZenModeOn for the answer! In this game I just played trying to do not let the opponent to connect groups and to defend my weaknesses. So I’m glad to know that at least I did something, thank you again!