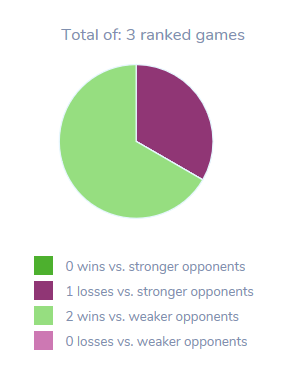 Status of stronger or weaker refers to the situation AFTER the game is ended and rating points earned (or lost).
Not so straightforward, but that’s it

Could it explain your case?

No, the other player was ranked higher before and after the games and still is. Also the fact that my loss is counted as a loss to a stronger player but the wins are not. 3 games were played with 1st being a win by me, then a loss by me, and lastly a win by me.

Don’t forget the handicap. If you correct your rating to take the handicap into account, than it is weaker, stronger, weaker.

I think it is automatically adding a handicap. My settings for handicap are “no preference” 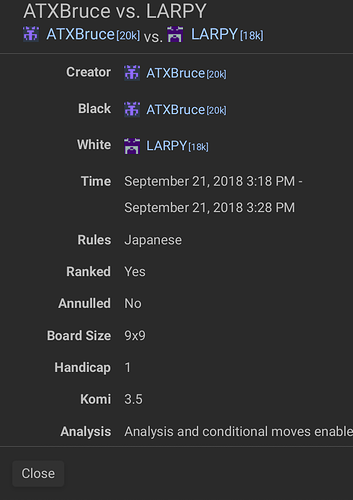 Isn’t this giving my opponent the handicap? 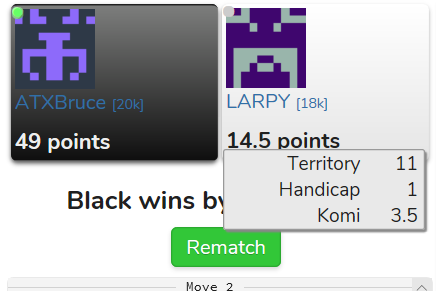 It seems odd that handicap-1 is basically “play black with normal komi.” Something seems wrong, here…

I agree it doesn’t make sense to me. I also have a lot of games like this.

Hm? White is the stronger player and has lower than normal komi. What’s wrong with that? Or am I missing something? On 9x9 giving a whole stone would be too much…

Huh, didn’t realize that the komi for 9x9 was still 5.5. I guess it makes sense since the games are so short.

Once you start playing in the major league you’re gonna wish komi was 6.5. At least when playing white.

Taking away 2-3 points is huge. We scramble for a single point in sente, 40 moves down the road. You give either player a cushion of 2 points that means fewer risks and a secured game.