Hi everyone, just wondering about the graph/score, white won by half a point but he graph says black should win, did we score it wrong? (The seki maybe) or did black miss something that could be killed? 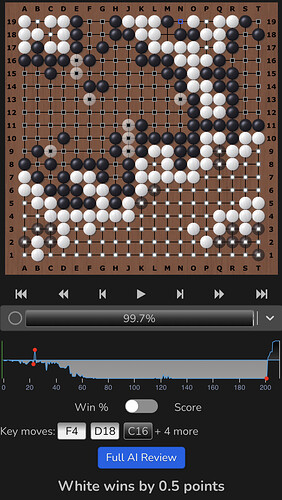 Yes, the game was scored incorrectly.

Since that top group is in seki, the two points marked for white should not count as territory. You have to manually mark those territory points with blue squares to indicate that they are not territory.

Oohhhh I thought the 2 points were awarded, ok thanks for sorting that!

It depends of the rules, in Chinese rules these 2 points count but not in Japanese rules.

In AGA if you use territory counting those count as well

The way to still score this game correctly would be for the players to manually unmark P19 and P17 so those become neutral points, before agreeing to the markings and proceeding to counting the score.
Then black would have won by 1.5.

As it is now, you could ask a mod to annul the game because the result was incorrect.