I’ll my fingers crossed for you, @SgtSunshine

Let’s assume somebody is 10k.

Maybe read up on how ELO works

Yeah, I wasn’t sure either I said that good…

Yes,that definitely makes sense (I understood it from first message). What i wanted to say, 10k will never win 100% of games against 11k. There is always a situation when weaker player is better. If the people were bots, and always play the best move you can calculate with given memory, time, then a stronger player (bot with better programs) would win. But, our brains are much more complex, so you never can be sure how to change the rank correctly… Still not sure this is understandable…

Maybe read up on how ELO works

In my opinion, ELO is the best possible algorithm for changing ranks. Maybe some of numbers are wrong (with very small mistake level), but the point is definitely achieved there.

For anybody wanting to learn more about our rating system, please cf. …

Calling @mlopezviedma: Could you pls add the last three links to the first mentioned thread?

I was going to reply earlier but I wasn’t sure how to word what I wanted to say. Let’s see…

With Japanese rules, the stones are placed on the hoshi. This can be an advantage to black, but only if black realizes that the 4-4 points are influential rather than territorial. So, while handicap stones can help even out a game between differently ranked players, it can also hinder players from finding their own playing styles.

Of course it can still help weaker players get better, but the handicap stones distort not just black’s play, but also white’s play. White has to be very aggressive and fast. In contrast, black needs to play slow and steady (i.e. solid) to keep white at bay. In other words, players can learn some bad habits by playing only handicap games, e.g. passivity for black, and overplay for white.

Well, it could be that the learning will come full circle when a formerly weak player has to take white and play more aggressively. But it’s certainly a less direct path to finding your own style because handicap stones definitely push you towards a particular style.

In conclusion, I’d imagine that there are some people who dislike any forced deviation from what’s comfortable and fun for them when playing go (even though getting uncomfortable once in a while can help you grow as a player). After all, if it’s not fun, then why would anyone want to play?

Of course there are other rule sets that let you place the handicap stones as you see fit, so that particular issue is not exactly a knock against handicap stones in general…

Well no system is perfect, but I’ve heard people say that to be a good player you need to adapt to any situation - I think that was said on this thread, and if handicap stones change the nature of play then I’d say that comes under adapting to a different situation. As for style, a famous Jazz player once said “Style is limitation.” and I think that applies as much to Go as it does to anything else. I guess in the end people are going to go with what seems right, but I for one would rather give a weaker player the handicap and challenge myself to deal with it, than take an easy but boring win without. As you say If it’s not fun, why play?

Meanwhile, I have invited you to join the oct 2014 tourney.

interestingly I’ve just been creamed by a player who gave me eight stones, Strangely it was me doing almost all of the capturing but they flowed through my barricades like morning mist, then turned to iron. This is the game - https://online-go.com/game/1028331 - I haven’t had a good look yet, but I expect I can learn something from how I was eaten alive. I’m assuming from the name that I was playing a woman, and I wouldn’t say she played aggressively - She was just very agile.

I myself feel too weak to review, but just a few things that came to my mind when I quickly went through that game:

All in all …not a too bad game for B I think.

i can confirm that my rank has gone up after losing, twice that I can remember. The most recent one i lost by 2.5 points to someone 3 ranks above me, and my rank went up nearly half a kyu.

I would personally prefer handicap games with <6 handi stones. The reason for this is simple: if too many stones are given, the handicapped player can easily “hold the advantage” even if losing many points. Winning 6+ handi games could develop a overly conservative attitude of playing, which would do its harm in even games.

This is also acknowledged in real-life handicapped tournaments: the tournament director would rarely set up games with 5 or more handi stones.

@matburt @anoek It would be cool if we can add a max. handi ceiling…

As of now we only have none handicap or auto.

[quote=“xhu98, post:27, topic:2274, full:true”]
I would personally prefer handicap games with <6 handi stones. The reason for this is simple: if too many stones are given, the handicapped player can easily “hold the advantage” even if losing many points.[/quote]Mh… I have played against 21 and 23 stones (with beginners in Real Life who insisted < shrug >) … and won

then finally they acknowledged that the 19x19 board might be a bit large at the moment. And the guy who currently play with me IRL every Friday needs 14 stones on 19x19. We still enjoy these games, though I always almost sh!t my pants when I’m confronted with that many B stones.

[quote]Winning 6+ handi games could develop a overly conservative attitude of playing, which would do its harm in even games.[/quote]Mh, in those games it apparently lead to a mistakenly too self-assured attitude.

[quote][…] It would be cool if we can add a max. handi ceiling…[/quote]I assume you mean as an option, right? I wouldn’t want that forced on me.

[quote]As of now we only have none handicap or auto.[/quote]Uhm … 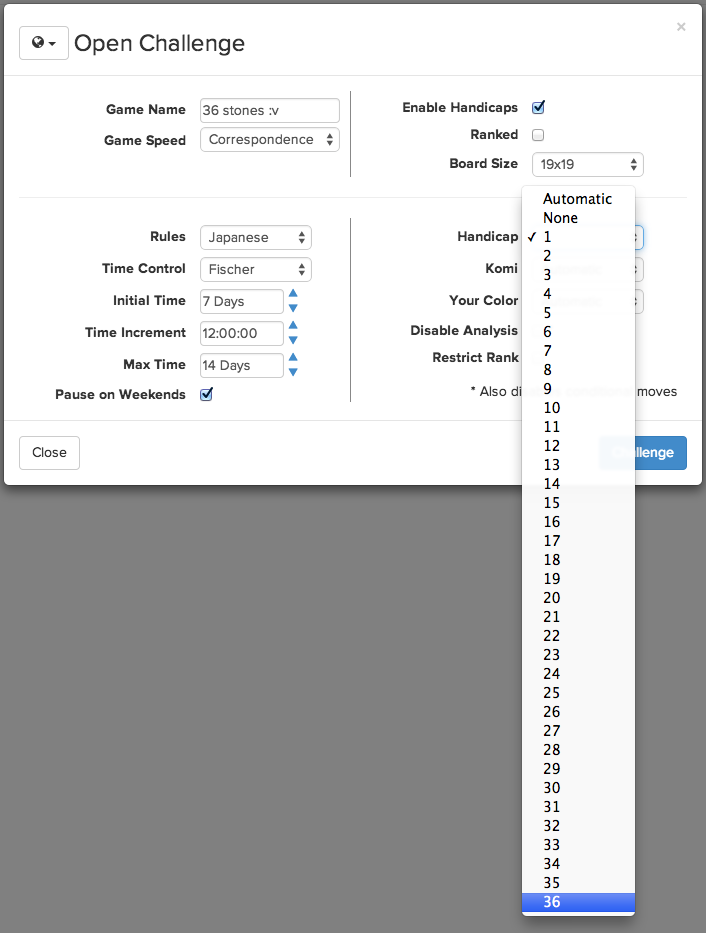 Or am I misunderstanding you?

i can confirm that my rank has gone up after losing, twice that I can remember. The most recent one i lost by 2.5 points to someone 3 ranks above me, and my rank went up nearly half a kyu.

I don’t think that’s the expected behavior for the ranking system. My understanding (perhaps I’m wrong) is that losing should never increase your rank and winning should never decrease it. I don’t believe the system takes into account margin of victory nor makes a distinctions between winning by resignation, timeout, or final score.

What you’ve described might be a bug. Perhaps, a developer such as @matburt could chime in?

i can confirm that my rank has gone up after losing, twice that I can remember.

Hi @Uranus we’ve seen this a few times now and we’re looking into it. What game(s) did this happen on? The one you mentioned where you lost by 2.5 was game 889307 it was an unranked game and didn’t affect your rating.

It would be cool if we can add a max. handi ceiling

Well… you can’t play a rated game with someone more than 9 ranks higher than you… so there is that.

Apologies. I meant that in the tournament setups, there were only two options: either none handi, or auto based on the rank difference. And I realized that people preferred <=4 stones for all games (this happened when I was managing Quick & Review tournaments in GO Basics group.)

I assume you mean as an option, right? I wouldn’t want that forced on me.

Yes, that will be optional, not imposed

@matburt This handi-ceiling option would be cool if it’s in our next patch!

It also happened to me. I won by few points against a lower rank player and it decreased my rank. I didn’t say anything cause it was fair, the game is old now, so I don’t think I can get the game link now, but I’ll look for it

nevermind, the other game in question was deceptively close to another one that made me go up, it actually made me go down 1 point.