Has anyone seen this strategy before?

I was browsing games on OGS, and ran into this player, who kept using the same strategy against noob_bot_3 (19k)

This player started by making one large group in the shape of an X with the center at tengen, and then stretching limbs into the other quadrants, slowly poking at their opponent’s eye-space. Because the big X had so many liberties, they could advance fearlessly, and noob-bot kept losing big chunks of the board.

I’m guessing that a more advanced player could probably secure their corners more effectively and defeat this tactic, but I was still impressed by this approach - which I’d never seen before.

Am I just out of the loop? Is this a well known strategy? Or is this something original that this player came up with?

Side note - the same strategy doesn’t work so well against a 1 kyu human opponent, but it’s still quite interesting 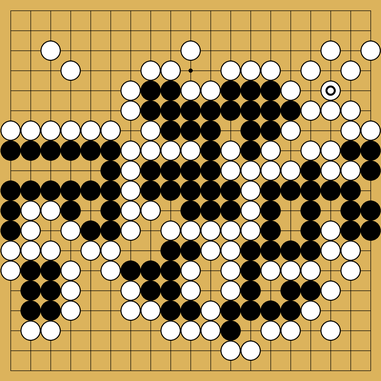 It reminds me of the Great Wall strategy: Great Wall at Sensei's Library

Lots of good discussion there that’s a bit above my head… but this stands out as possibly relevant:

Basically, the problem with this fuseki is that it is far too single-minded. All White needs to do is recognise what that purpose is (starting a complicated fight) and play to avoid that.

Yeah I guess if the player went to refine their strategy where instead of playing nobi/extensions all the time, they added in some jumps, one point, two point, knights moves of different sizes, they could end up at something like a Great Wall.

Haha! That was amazing to watch a couple of those games. Noob bot got ripped apart, LOL

I’m guessing that a more advanced player could probably secure their corners more effectively and defeat this tactic, but I was still impressed by this approach - which I’d never seen before.

I’m not that strong… but I took a look at a couple of games and to it’s just that noob_bot keeps doing the “weak AI”-thing. Like playing randomly when 6,7 stones groups are in Atari or not doing obvious things like blocking the scary X group when it’s advancing on its stones.

But I really think the games in this account interesting. Like. Building big walls one stone at a time seems to be the first obvious thing to do to create territory.

The games where the users loses against the bot are interesting too. They are trying to build a big moyo in t he centre. It obviously does not work that well… but the games start looking more “normal”

maybe we’ll see a mix of both strategies soon?

Maybe that player is a child? They play very quickly (games against the bot only take 10-15 minutes total). The way they play also reminds me of how some child beginners play.

At their apparent level, I would recommend playing on smaller boards. Them playing on 19x19 instead may be an indication of them being from the Far East, where beginners playing on small boards is not as common as in the West. 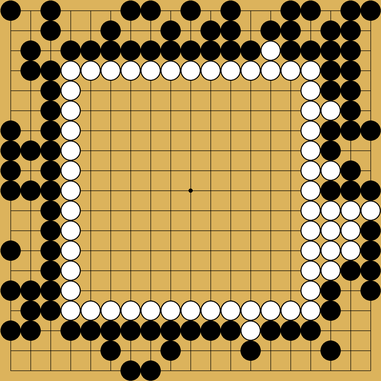 It kind of reminds me of AlphaGoZero early self-play games - i.e. “what happens if I try THIS?”

I find noob bot way weirder in that game… Why does it only play below 3rd line?!

Why does it only play below 3rd line?!

Classical example of center versus side territory at Sensei's Library → 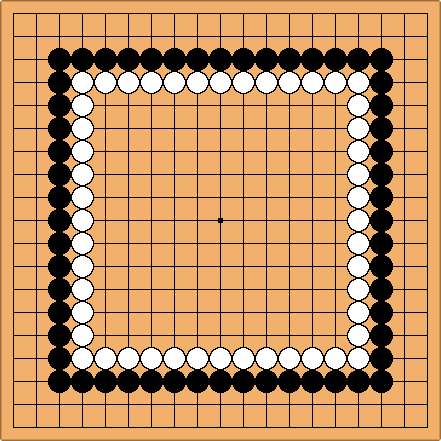 ^^ normally supposed to show that it’s bad to do this as white, ignoring the fact black needs to play more stones than white.

How tf is this correct?! [wtf]

Well, yes, if White is passively playing only above the 4th line. I mean, both don’t make sense.

Seems like someone misses playing snake on a Nokia phone so is doing it on OGS instead.

Reminds me of the time I started playing Go with my dad. I always took the fourth lines of right and left sides in my first 38 moves. Clearly two sides are not enough points so I always lost. But I’m not unhappy if I lost; I only went mad if he prevented me from building the great walls.