How do I know a game is over?

I am having trouble ending games.
I look at the board and think it is settled, but my oponent don’t see this.

I played Black, I thought the game ended here: 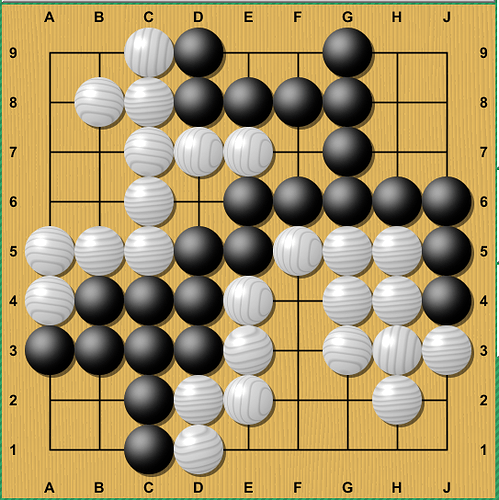 But my oponent only admitted the game was over several plays later (I can’t post 2 images because I am a new user, but here’s a link) https://i.imgur.com/OWBaZOc

1- Didn’t he give me points at top-right AND bottom-left corners?

2- Was I wrong thinking the game was over on image 1?

3 - I played on KGS and it counted the points as I had no territory, all my stones were dead. How many points I ACTUALLY scored in this game?

Learning when the game is over is very difficult for most new players, and I only recently acquired the knowledge to know it. However, sometimes it is also vague as to when the game is over, and you have to play a few more moves to figure it out.
Question 1: No he did not give you any points, nor did he take away any, because you also played move to respond to his. In this case, your group already has two eyes(e9 and h9, as well as a1), and therefore you don’t need to play any moves, and you can just pass.
Question 2: You were not wrong in this case, the game is over, because both players have two or more eyes in all of their groups, and don’t need to play anything more. There is no need to invade, and so neither player should. However, this may be difficult to see for a lot of new players.
Question 3: In this game you scored 12 points, compared to your opponents 17 points(without komi), however, your group was not dead. I believe that it was either an error in the scoring software, meaning you have to tell the software to count the stones as not dead(I don’t know about KGS, but here on OGS you can click on the group of stones until they appear solid, meaning alive). If it was not an error of the software, then it was either your opponent making an error, and believing the stones to be dead, and clicking on them to tell the computer so. Or it was a attempt to remove the stones to win by a greater margin, which is technically cheating.

If you have any more questions just ask me…

Isn’t it the case that this is not a drama, it is as simple as you go back to playing till no-one can actually play any more legal stones if necessary?

If you have no more moves to play, you pass. Your opponent will either have to play a stone - and once the dame is filled they will then be taking away their own points - or they too will pass and the game will definitely end.

This is trivial in 9x9 - as you said: at most a couple of extra turns to the end.

It’s a bit more painful in 19x19 if your opponent insists on filling the dame, but not the end of the world? It’s not a “right or wrong”, but a matter of preference?

So to me in the first picture, as you said, the game is over with you scoring 12 and white scoring 17+komi.
With white’s unneeded moves and throw ins, I now count this position (with japanese scoring) as 16-16, meaning white now only wins by komi (which I guess if komi was 0 for any reason, this would now be a drawn game) although it could have been b17-w16+komi had you have not filled in H7.

The game is over, when both players agree it is by passing consecutively. It’s as simple as that. As we progress further in our skill we usually see sooner that there is no reason to continue playing, but that does not matter.

Unless your opponent is deliberately wasting your time to spite you, he has all the right to keep playing. Usually its the other way around though - the losing player wants to keep playing, but whatever

Fair point. As you’re lost either way, you can really resign if you want the game to end. If you opponent wants to play away his lead, why argue?