How is this joseki not OP for black?

In half of these games that have it black does this in exchange for getting a strong position on the bottom or in the centre, is it not? Seems like it’s a deliberate exchange rather than a forced necessity. Here’s an example 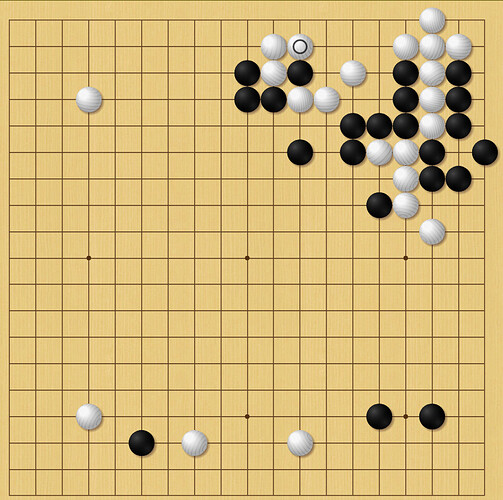 Glancing over the other half of the games it looks like black does this deliberately in order to try and kill (1, 2) the white’s group, or to set up a dual attack (1, 2)

From where it stands to me it seems like this A6 stone is there more so to limit black from just destroying everything in the local area rather than give white some breathing room and a potential attack.

So do you find the exchange of 1-2 in your last diagram a valid way of playing for black? Why not just pincer 1 from a strong position of the b7 group?

Why not just pincer 1 from a strong position of the b7 group?

It is situational. As in most cases, there is a whole board position to consider for joseki choice and potential follow-ups. If black has some enclosure in the upper left corner, white C10 may be too much, and white could go for a more shallow forcing move around E9 instead: 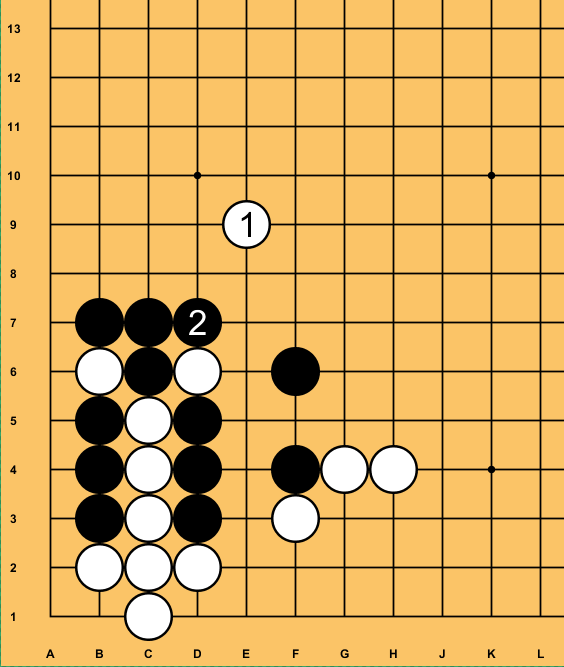 But if black already had that enclosure in the upper left when white invaded at 3-3, white had options to play differently in the lower left. For example approach at C6 instead of invading 3-3, or play a different joseki line, for example: 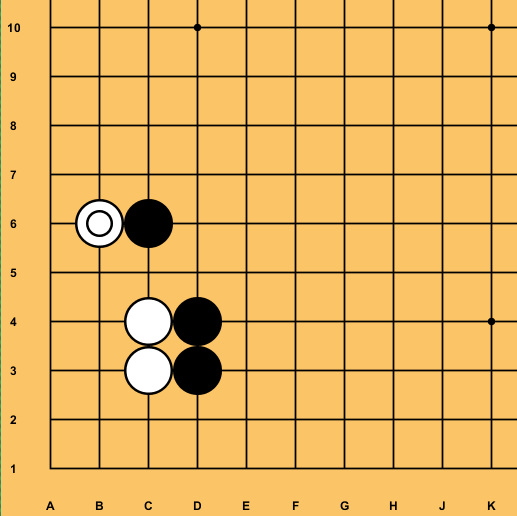 … to which black could respond peacefully (which is usually still fine for both): 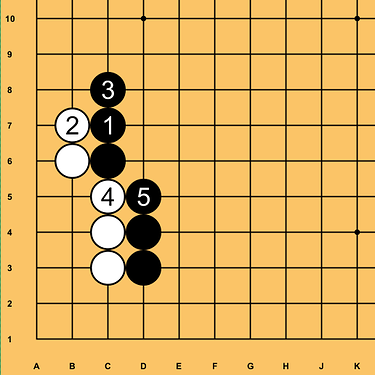 …or black could opt for the flying knife (very complicated, but still 50-50 if both players know what they’re doing).

By the way, I think the reason for black making this exchange: 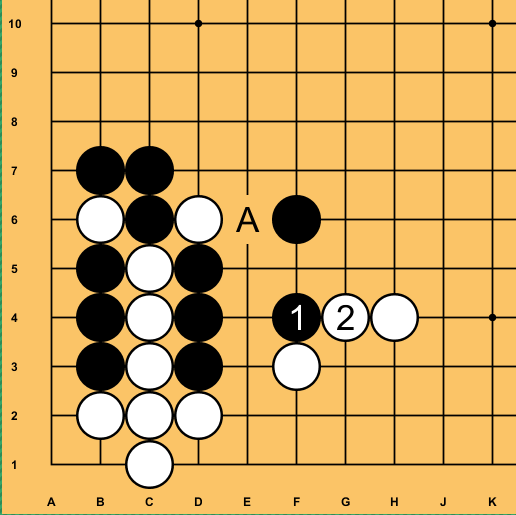 … is to discourage white from playing at A and killing 3 black stones in sente: 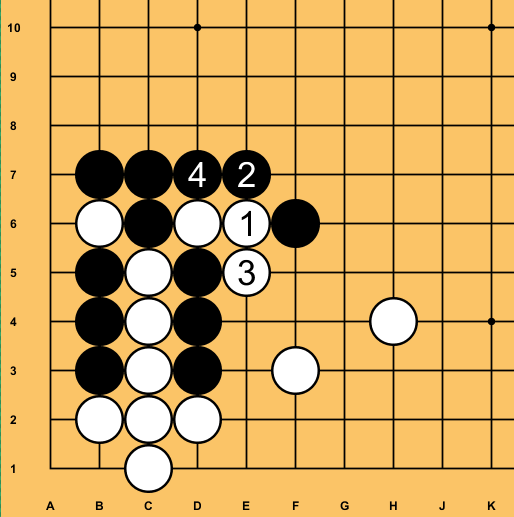 With that F4 exchange on the board, black has the option to fight back like this: 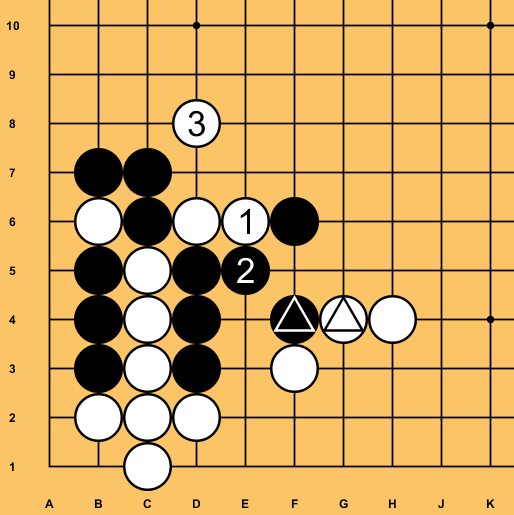 … but black is not even committing to that, as he can still sacrifice: 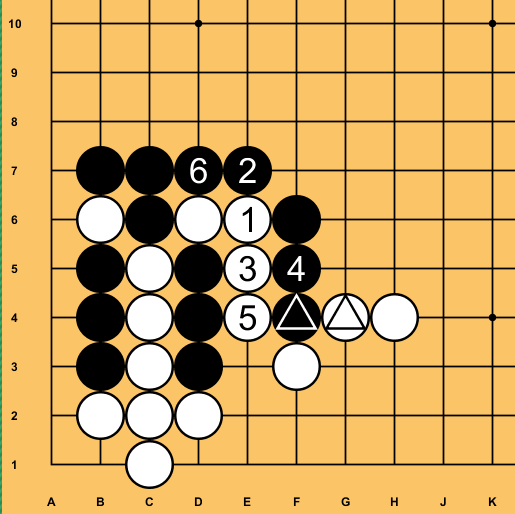 … and black’s F4 exchange makes it gote for white, which is a considerable improvement for black.

As far as I understood from some analysis that I found online is that the reason why F4 isn’t played right away is because black wants to reserve the opportunity to exploit this aji from another angle, such as the H5 and H3 attachments.

To address your first point regarding the E9 peep, the understanding here, as you said, is that up to this point black chose to play in a way that assumes that developing towards the left side is more important than the right side, and through that we can assume that black does indeed have some influence on the left, so in my understanding this kinda peep is playing too close to a “thickness” (relatively) in the area where black has some influence and it’s aiming at the stones that were meant to be sacrificed anyway. So the question arises, is black playing a move like E11 in response to this peep really that much worse than saving the 3 stones that affect the life of neither of these two groups?

As far as I understood from some analysis that I found online is that the reason why F4 isn’t played right away is because black wants to reserve the opportunity to exploit this aji from another angle, such as the H5 and H3 attachments.

I don’t know. I just played around with KataGo and noted that it had a tendency to make that exchange with black, so I tried to find some explanation for that. But I also noted that pros don’t seem to have that tendency (at least not in Waltheri’s, though Waltheri’s doesn’t seem to have many pro games dating after 2019).

In some of the pro games you linked to, black chose to build this influence towards a white corner, instead of towards a black enclosure. So it seems like pros don’t care much which it is.

So the question arises, is black playing a move like E11 in response to this peep really that much worse than saving the 3 stones that affect the life of neither of these two groups?

Do you mean this? 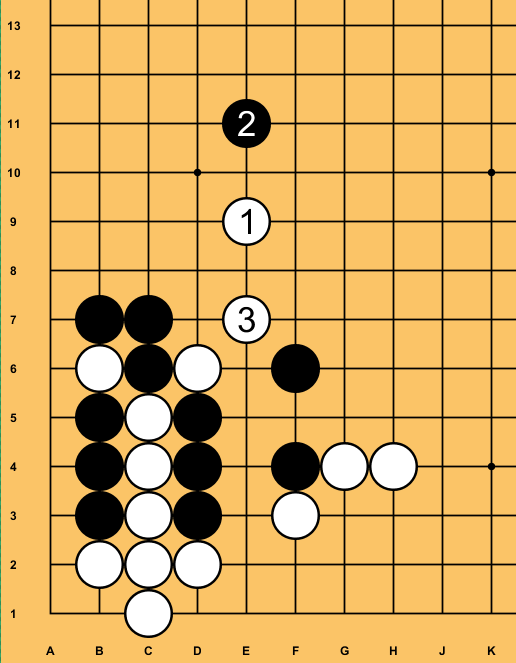 I don’t know. I guess I’d need to see the whole board position to judge if white 1 and black 2 make any sense.

I meant without that one exchange. Something like this. Maybe #2 in a slightly different spot. 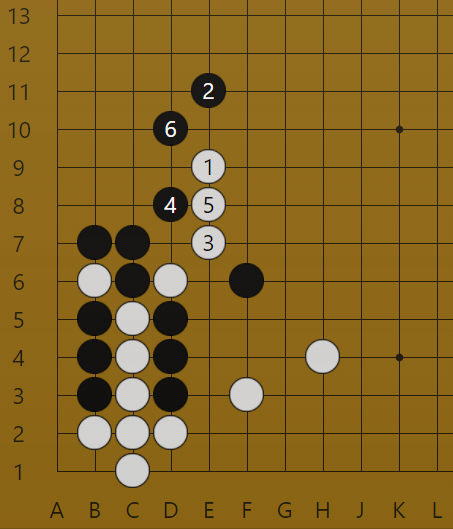 In this case those 3 (4) stones were meant to be sacrificed anyway, black got a tenuki before stone #1, and black can still play your sequence, so white needs to decide how to address it from here.

It’s still ambiguous of course and black can still do things on the right side like H5 or J5, but I don’t think black will add another move to this group. Not in my understanding at least.

I think there is a big difference between sacrifing the 3 stones with a sqeeze and abandoning all 4 stones on a large scale, giving white the upper hand in the center.
But like I said. I can’t really judge the validity of white 1 and black 2 without seeing the rest of the board. A vague indication of there being some black influence in the upper left is not enough information.

It was just to show that white’s D6 stone has a lot of aji and white has various ways of making use of that, so objectively, there is no reason for white to be dissatisfied with the joseki result.

But I can understand that white might feel dissatified if he is a calm player who doesn’t like tactics and fights.