How much does the size of the board influence whether a move is considered tenuki?

I was trying to use an analogy on another subject but this thought came up:

For example, in 9x9 a 3 space jump is probably tenuki, but in 19x19 it could be not only a response, but even joseki.

Of course, it always depends on what else is going on on the board, but how far do you “read”, what’s your “radius” for local vs elsewhere? 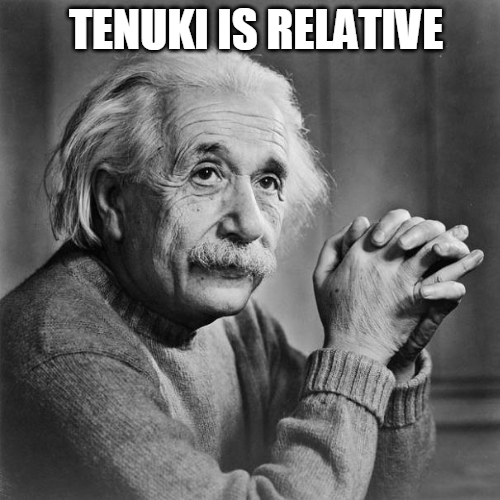 you have to respond to KOantum teleportation

So, for example a ko threat on the opposite corner for example isn’t tenuki, because it’s part of the same fight?

Edit: for the record I was typing at the same time with stone defender.

Yes, I would say so. But other people may not agree.

There is a simple heuristic that will probably improve your play at your level:

So there is no radius, it depends on whether the groups are settled.

The biggest point can also be very close to the settled position.

That is a very good point… I’ll keep that in mind.

there is no tenuki on 9x9, the whole game is one local fight

yep, if your move is a response to your opponent’s, it’s a continuation. otherwise it is a tenuki.

this term is loosely used, but typically in early opening, say, if one takes a big point, you take another elsewhere, i would say it is not considered as tenuki. but it is just a term, we can use it however we want i guess.

it is just a term

its also often not clear what is

what you actually do entire game is choosing which stones to defend. Even 3-4 stone is not settled, you can enforce it with enclosure any moment. When you place your stone very close to stones of your opponent, they don’t like it for some reason, so, again - you have to defend your stones.

I see what you did there

Yes, so tenuki is leaving the local position as it is and going somewhere else. Your tenuki move doesn’t affect what you were doing up until now and takes the battle elsewhere. In some way, you could see tenuki in terms of your intentions.

A ladder breaker 15 lines away is not a tenuki. Tenuki is about the purpose of the move rather than a fixed distance.

My literal take is:
Sente is “before hand”, gote is “after hand” and tenuki is “hand pulling out”.
So tenuki is anything other than a cycle of playing a move your opponent must reply to or replying to your opponent’s move.
So you are taking turns in a situation (sente and gote) or pulling out of that situation (tenuki). How far the “situation” extends I guess is the answer to your question.

Also, I wouldn’t worry too much about trying to build a mental binary classifier that allows every move to be decided as tenuki? Yes or no. Sometimes the line is blurred, and it’s better to describe a move with more words. For example there could be a move elsewhere that to a weaker player who doesn’t understand what is going on looks like a tenuki, but to a stronger player it wasn’t actually a tenuki but a probe to decide how to continue locally. Or a kikashi before defending is often some way away from the other moves. Or imagine in endgame there are 2 exactly 30 point moves left unplayed because they are pure miai. If White takes one, then black will take the other as an interlude to the small yose. Neither local situation affects the other, but it was a non-local sente. Is that a tenuki?

Tenuki is about the purpose of the move

Which of these moves are tenuki? 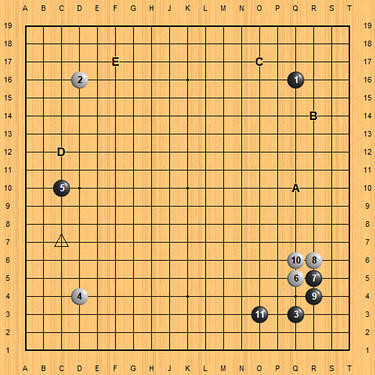 There’s no question that A is a local move and E is a tenuki. In all cases except the immediate A, Black is given the option of pincering White on the right side; however, only B and C are relevant to the following fight, and B more so.

I don’t think White can claim that D is sente – if Black wants to ignore it and play on the right, he will (and, ofc, Black can resist with a more active move at C6).

I’d refer to A as a local move, D and E as tenuki, and B and C and “semi-tenuki”, with C being more of a tenuki than B.

By the way, I recently read an intriguing SL article on the “taiji style” way of thinking.

As I understand, the idea of this method is to consider all sets of your move and the opponent’s following move as pairs, without distinguishing between “local” and “non-local” responses.

The article is quite old (2007) and I suppose implementation of the “taiji” way of play would now be recognised as simply bottish in style.

Personally I’d say any of these moves can be called tenuki, except for A. B is somewhat borderline.

For me the interesting thing about the concept of tenuki is the following:

On one hand, in almost all go positions, which is the best next move does not depend on the history / the order of moves up to this point. And since the concept of tenuki strongly depends on what was the last move, I would argue that taking into consideration whether a move is tenuki or not is, strictly speaking, fundamentally flawed.

But on the other hand it can’t be denied that tenuki is an established concept which helps when deciding where to play next. It’s something about how humans think during a go game, that keeping the last move in mind is actually more helpful than harmful.