I have a suggestion, let us know when someone is either present or not

While playing a game you know someone is there because they are making moves, when the game is over it would be nice to know if they still have the window up, so could still be looking at the screen, in which case you could type something and they would see it.

The way it is now you just assume they left because they probably did, so bothering typing something that most likely wont be seen is annoying. Like a lit icon or color bar around window telling you it’s active on the other end.

I like this because it could create more interaction between players, even a discussion over the game you just played.

No idea if this is where it should go, thx if you made it this far.

We have several features to facilitate this already.

If the user is one of the players, there will be a little blue/green dot on the player card if they have the page open.

If one player makes a comment on a completed game after the other has left, they will receive a notification.

The chat line show how many people are in the game: 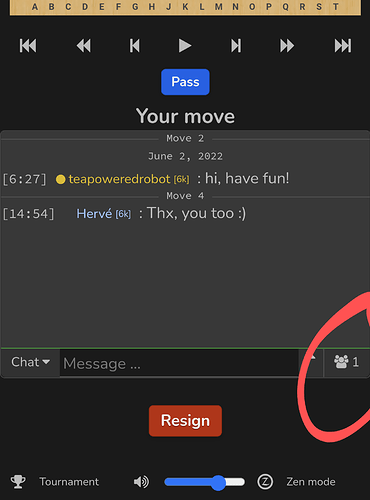 congrats on your first post @RunAmuck and welcome to the forums