Apologies if this has been discussed elsewhere but a couple of times I have played a game in which my opponent has placed a stone on the very edge of the board as an invasion. Every time I have had it used against me I have been kind of stumped as to how to respond. My instinct is obviously to want to kill the silly lonely stone on the edge of the board and so far away from its friends. . . In this effort I have tried both attaching to it directly and surrounding it from afar but everytime the kill has eluded me and my opponent has been able to make the stone live. . .

Is it a specific type of play?

Is there a correct or ‘standard’ way to deal with this type of invasion?

Is the lone stone on the edge of the board killable or is it an invasion method that I should accept as sharing and simply try to reduce the damage to get the most?

If it is a viable invasion method why is it not used more?

Any help you can give is appreciated. 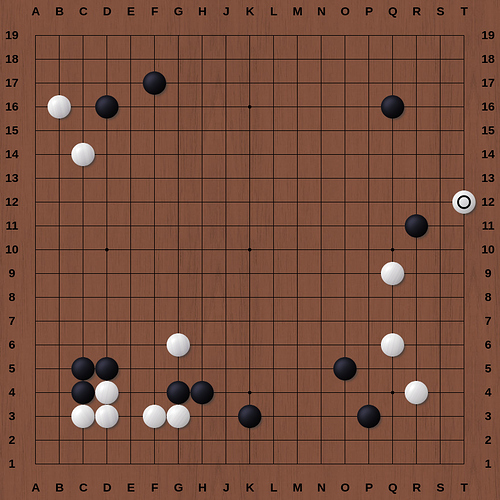 I would reply to that by playing around the stone such that it cannot escape or make shape. First line stones do not have any good shape, so if they can’t escape, they can’t make eyes.Play something like R14, S14 or S15, then the white stone cannot jump into the corner. If white tries to connect back to the lower right side (e.g. with S10), then you have the initiative to play a large point (e.g. C9).

The result is that white made no points in an area that was not even black yet, while black gets to reinforce the upper right corner, get more influence in the upper right and make a base in the lower left. Seems very good for black!

There is also a go proverb that could’ve helped here: you’re trying to attack the stone by attaching. Don’t attach when you attack, but attack from a distance.

You should just ignore it, and treat it like a pass, if it is that far away from other stones. It can’t make much territory and is hard to live, and if it is saved, it just becomes a deadweight. Play elsewhere, because it’s never going to be that good on the first line.

(for those that don’t know)

my first instinct would be S10, my second R9.
with both moves, white gets cut

I’m gonna disagree with the “Ignore it” bit, but I do agree in not necessarily expecting to kill it.
I’d cut it off either via iron pillar (S11), or a kosumi to threaten the bottom side (S10). This will force the stone to run, and him running gets you twofold benefits: first, you get territory on the top by extending from hoshi while your opponent makes no territory, and second you get to make that bottom right white group weaker, and quite open to attack. Meanwhile w will have to do a lot of running to make it alive.

As mentioned by Angeling, R9 is also an option that solidifies things

Don’t ignore it. Just keep your stones connected with R13.

In this example, killing the stone on the edge gives you… 2 points? Try to focus on the big picture.

my opponent has been able to make the stone live

In the game, picture playing R14 at move 41 and letting your opponent play T16. Do you see it as a big success for white? Making stones live doesn’t necessarily mean success.

If it is a viable invasion method why is it not used more?
[…] is it an invasion method that I should accept as sharing and simply try to reduce the damage to get the most?

You used the term “invasion” several times. When I look at move 24, I don’t even see an invasion, even less any damage.
I believe you have other situations where a first line play was an invasion or a reduction. It’s just not the case in this specific example.

The game analysis is offering several options for move 25, and none of them is a direct answer to T12. The best plan here is to just ignore it (what @Starline already said).
Locally, white could later play S9 or S10 to connect the stones. So at some point, a black move around S9, separating white and undermining white’s base, would definitely have some value.

I’d cut it off either via iron pillar (S11), or a kosumi to threaten the bottom side (S10). This will force the stone to run

You are not forcing anyone to run. If I do a missclick at T12 and see you respond at S11, I’ll just be relieved that my blunder didn’t cost me the game. I might even be tempted to play S9 and watch you waste another move

[edit] just to be clear, white would still be in a bad position after a direct attack from black. But as the analysis shows, white would have recovered half of the blunder.

If you tenuki without playing something like R13, then you ignore the followup with R8 or S9 to remove the points white has on the right side. Where are white points afterwards? Keep in mind that it’s a ddk asking for help, not a weak dan. “Just tenuki” requires you to understand a lot more than just the local situation, and I rarely see 5ks tenuki local sequences at appropriate times. It’s always worked out better for the ddk’s progress to over-defend than to under-defend.

Don’t ignore it. Just keep your stones connected with R13.

If you tenuki without playing something like R13, then you ignore the followup with R8 or S9

@Kaworu_Nagisa Honestly I am not following you. Compare the board after move 14 and after move 24, do you really think the play at T12 makes a difference in the local position?

Thanks for all the input. Amidst the opinions I see a common thread, which I guess I failed to do . . . Don’t panic!

Can you explain what you don’t get?