Is it possible to kill White? 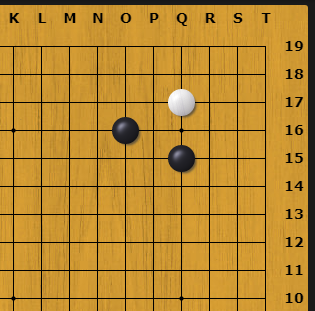 Haven’t properly read through the position but given how a 3,3 invasion against a star point is unkillable under normal circumstances I don’t see how two looser stones can make a difference.

Consider it from white’s perspective: if after playing a 3,4 and tenuki thrice will that stone die? I think not! At the very least there will be a lot of aji in that corner for white to use. And I don’t think investing three or more moves to surround that corner with bad aji is worth it for black.

Isn’t that the single most common response to the 5-4? Definitely not killable. Complicated, though. See also: why I don’t like playing against 5-4s

For context in my games this position arises with white playing first and then tenukiing twice.

And it’s understandable that there’s going to be a lot of aji and white is probably going to peep at saving this stone to get something on the outside rather than saving the stone directly.

R15 and O17 are the standard responses. O17 is ladder dependent. R15 can be complicated, depending on how your opponent responds. There’s a crosscut variation that gets messy fast. R16 & S17 both live, locally, at the cost of giving up a lot of influence, but avoid the complications.

Oh! I was definitely thinking white.

I still think white can live. P17/P18 seem necessary, or else white just runs out along the top, but there’s a ton of aji, either way, and white has a lot of space. White will live small, though, and black can get serious thickness with few defects.

The main lines seem to be B-P17, W-Q16 and B-P18, W-R15. White can also press from the outside for influence, but black’s getting something like a 20 point corner, so that had better be some really useful influence!

I don’t see a way to kill white. After the exchange P18-Q18, white will either capture P18 or take the corner.

White however might not want to live small, and could play R15 or S15 in answer to P18, even if it means sacrificing Q17. Waltheri’s database has quite a few examples of such positions in pro games.