Hello everyone, I played this game against a friend of mine who typically crushes me! funny enough we were playing two correspondence games simultaneously, one non ranked game I had 4hc and lost by 15+ points. This ranked game was played even and I was able to put one more victory on my belt
in this game white’s top right group looks pretty small, I wasn’t sure if it was killable, and just played end game moves and didn’t attempt anything.

thanks in advance to anyone that takes a look at it! 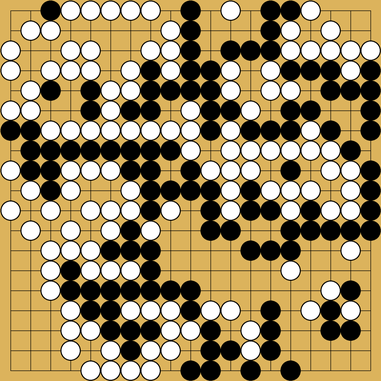 back to an even marble game

I think the general rule of thumb is that 7+ intersections is enough to make 2 eyes… so i guess killing the corner would be dependent on a mistake from white?

I’m honestly pretty perplexed that it’s a SDK asking this question and not a TPK.

Oh come on, don’t be mean

it is good to ask questions, and it is not that unreasonable I think.

I think this is the closest it could have gotten had white not be vigilant (after 229).
https://senseis.xmp.net/?LongLGroup

Or go through the shapes yourself: https://senseis.xmp.net/?CornerShapes

It’s at least seki or ko right?
(didn’t look closely but I feel like hane can lead to multi-step ko/seki)

Personally, given perfect play, I don’t see anything for black (also I kind of tend to trust Smurph on this one), but there certainly is a lot of room for error

The hane white can just block I believe. After that, R19 (while scary looking) does not really do anything AFAI can see.

R18 may be even scarier, but still there seem to be at least two nice ways for white to wiggle out. (I think they are pretty, I will let you look for that one yourselves

Correct me if I’m wrong but S19 looks like either seki in sente or ko?

After W230 theres not a single thing black can do.

still skeptical of that.

I don’t see why you remain skeptical, a boxy 6 in the corner is the largest killable group, while this is at the very least 2x3+1 but more like 2x4

yea I mean I’m certain that the group is not killable but there is something that black can do. After discussing with Adam, we concluded that Black can at least gain free points in sente out of it via seki or start a ko.

I don’t see why you remain skeptical

Well to qoute you, you said “not a single thing black can do” to which Spatula was (to my best knowledge at the moment) rightfully sceptical. At the moment we can see ko or seki for black which is certainly “something”

Yes, it’s not EXACTLY what the OP was asking about, but it could still be quite interesting for him/her.

All your variations are based on the misconception that w plays T17; I will refer you to my variation “no #2” instead.

We are talking if there ever was “something” for black in that game. (That’s how I chose to interpret the original question at least, even though the OP did not say so clearly)

That premise in mind if black played Q19 at move 231 we see nothing better for white than advantageous ko or seki. Is there?

And all credit to @spatula’s diligence on this one

I would have given up much sooner, but now am happy to have seen all the possibilities.

Ah, I was just going by the thread title. Yea, the way w played there’s a seki.