Please forgive the off-topic, but sharing this could save lives. 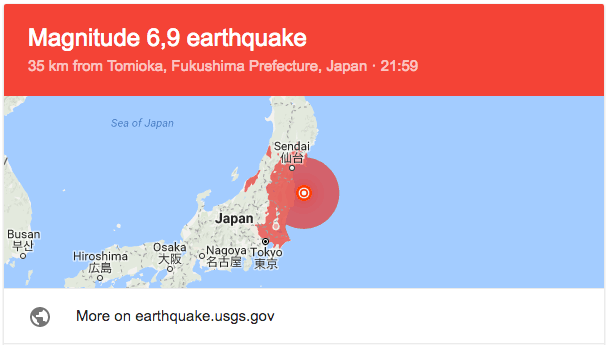 (the time given here is CET)

A 1.4 metre tsunami wave was recorded at Sendai, north-east of Tokyo, just over two hours after a magnitude 7.4 earthquake shook the Japanese island of Honshu.

[quote]A tsunami warning has been issued for Fukushima, and much of Japan’s northern Pacific coast, following a magnitude 7.3 earthquake on Tuesday morning.

The epicentre of the earthquake, which was felt in Tokyo, was off the coast of Fukushima prefecture at a depth of about 10 kilometres, the Japan Meteorological Agency said.

JMA said in a statement on its website that tsunamis are expected to arrive imminently in the Fukushima area.

The tsunami height is estimated to be one to three metres in the Fukushima area.

Residents are being told to evacuate from coastal regions and riverside areas to a safe place, such as higher ground or an evacuation building immediately.

Tsunami waves are expected to hit repeatedly, the warning said.[/quote]

Oh crap please please don’t have another meltdown or cause more leakage from the nuclear plants.

The one that cause the meltdown was ~50 times stronger and produced a 14-15 meter wave at the site. We should be safe this time.

We should be safe this time.

But in the ruins of the Fukushima nuclear plant the cooling failed for ~90 minutes, after which, according to TEPCO’s notice, the managed to get it back up. In such a horrific situation as is there, even small blows can do lots of harm.

And then … the fact that those ruins are still leaking lots of radioactive sh!t into the ocean … it’s not “over”, and it won’t be for decades to come, if not centuries. Oh well, with the half-life periods of some of those radioactive isotopes, it’s going to be hundreds of thousands of years into the future that we have decided to burden the coming generations with.