I have two questions on kos that have stuck with me for a while, and I haven’t found an answer.

There must also be single threats that you can make that give your opponent multiple threats in retaliation. Is there a term for that?

There is sort of a term for the first question, a ko that is easy and sort of can be ignored.
https://senseis.xmp.net/?HanamiKo

But it is usually one-sided, since normally there is a reason to play the ko, either they are behind and need to make the situation more complicated, or have to win to live with the whole group.

I assume he means a threat which, once answered by the opponent, gives him a new ko threat he can use.

Then it probably falls into the category of Loss Making threat - 損劫. The term is more general in Chinese terminology. Or even as a 假劫, 瞎劫, where it is a false or blinded threat, where the opponent can outright responses locally to gain (since if it is a “counter-threat” it surely can be used immediately).

I can think of a special type of ko threat that probably fit bill of the one move creating multiple more ko threats from the opponents - 征子劫 - ladder ko.

If you play a ladder breaker as a local ko threat from the other side of the board, and your opponent answer with a block somewhere halfway to nullify the ladder breaker, then the move to start the ladder from your opponent creates more “new threats” if it is also part of a local variation on the ladder side which can cause other losses than just taking the laddered stones.

Sorry all, I thought that it would be clear and it was not.

Take this board position for instance: 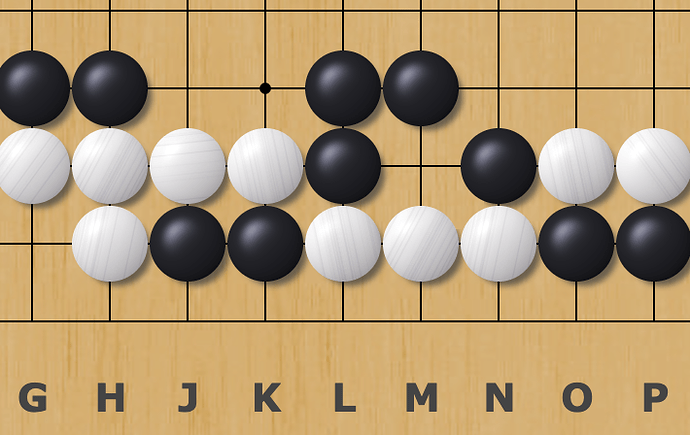 Black has no ko threats to make against the M2 White group, because White has more liberties.

NOW - Black has a ko threat against the M2 group, because White’s move reduced the liberties.

So M3 is a ko threat against Black, but it’s not useful in winning the battle, because it creates a rebound ko threat.

My second question in the OP is whether there is a name for moves like M3 that are ko threats, but also create opponent ko threats.

If you’re saying that the ko isn’t worth fighting at all right now because it’s not worth enough, then yes you can do that, just don’t fight the ko. Play those other moves that are worth more and come back to the ko only once those other moves are finished.

If you’re saying that the ko is worth fighting but it’s just that both players have a lot of big threats (i.e. the threats threaten a lot more than the ko is worth but the ko is still worth more than all ordinary non-threat moves so that you want to fight the ko rather than just playing elsewhere), then no you can’t do that. If you spend all your threats in a row (you threat - they answer - you threat - they answer - you threat, they answer…) while your opponent doesn’t, then you simply run yourself out of threats while your opponent keeps all their threats, so they win the ko for free. So if the ko is worth fighting, then you have to retake the ko after each threat.

If you’re saying that the ko isn’t worth fighting at all right now because it’s not worth enough, then yes you can do that, just don’t fight the ko.

You know what?! I think I was wrong in my head on that one. I don’t think you can play out the threats without retaking the ko every time. I was remembering something from long ago. I tried to play it out, and I was wrong. Sorry about that!

Is “loss making threat” the term of art? If so, that’s what I was looking for - just what to call it.

We try to keep ko threats even when we don’t see yet any ko coming. These moves have too little value yet in themselves so they are too early to play even if they surely would be answered.

The idea is simple enough that players didn’t really assign words to it (or to the failure to not follow it). Aji, miai have more subtilities and characteristics associated to the game of go so players retained a specific wording from another language.

So M3 is a ko threat against Black, but it’s not useful in winning the battle, because it creates a rebound ko threat.

I’ve heard these sorts of moves put under the label “bad ko threat”, along with ko threats which lose points.