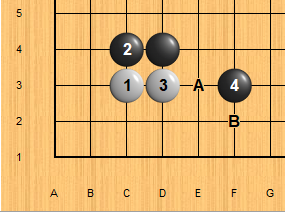 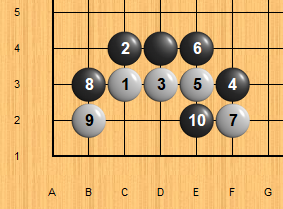 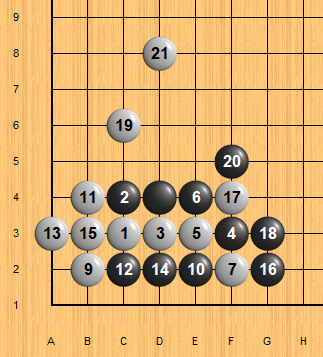 When I invade at 3-3 against stronger players, they often push me into this result which is supposedly even; but I usually feel that I ended up with the worse result (not much territory, gote / weak group) especially if there are relevant global considerations. 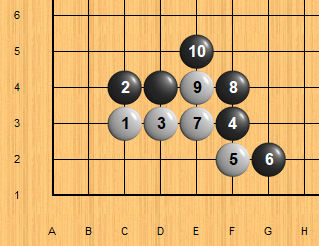 This comment is a big IIRC, but I am pretty sure Dwyrin commented briefly on both of these variations in a recent video, probably something in the last couple months and more likely in his Murder Mondays series. As I recall he said A is the most complicated 3-3 variation because it has so many lines, and that B is an adequate alternative.

I used parts, but probably not all, of this resource for OJE. http://huibangqyh.cn/forum.php?mod=viewthread&tid=13121

I hadn’t really touched up on that pattern until yesterday but it should be pretty useful now. I did fill out some gaps that existed.

If you’re interested in books, Kiseido just published a book of opening and middle game problems with an appendix supposedly full of discussion on this topic. I haven’t read it myself, so I couldn’t tell you if it has exactly what you’re looking for or not.

I did get that book and it’s fairly good. I probably haven’t gone through all of it yet, but some of the variations from it are on the joseki explorer. There’s lots of examples of the joseki in the context of games and pro games though that don’t quite fit into the explorer.

I think it is the other way around. B, which bugcat wants to play, is the most complicated variation called “flying knife” or “botkiller joseki” or “3-3 push and cut”. It is deemed the next avalanche and requires tremendous reading and study
Newtosenthe recently made lots of videos about 3-3 josekis and despite making a series about the subject, he omits this one cuz he deems it pointless due to its overtly complicated and dynamic nature: https://youtu.be/cW7o_TDt4l0?t=473
Gopro Yeonwoo talking about that variation: https://youtu.be/cW7o_TDt4l0?t=473
I see it often in Vegmandu’s games : https://online-go.com/player/54834/
One example: https://online-go.com/game/21146851
Here is another dan game from ogs with “flying knife” in it: https://online-go.com/game/18891083

There’s some small discussion of 3-3 invasions in this recent Michael Redmond video.

Also a video by Ryan Li that could be useful:

I’ve started adding the complicated versions from that book to OJE, firstly the ones mentioned without the 5-6 exchange in point 4 of the OP.

I’ve added this first since it’s a separate section of the book and some variations involve capturing races in the corner.