Mutual Damage and the Endgame

I recently stumbled across this Sensei’s Library article:
https://senseis.xmp.net/?MutualDamage

It works through a nice example of “mutual damage” in an endgame situation. The correct line of play is to depart from the orthodoxy of responding to sente plays. For me, this is a new concept that I was not previously aware of, and I think it’s a good example of how playing out the endgame is not just straightforward busywork.

A couple of mathematicians wrote a book applying the full power and complexity of combinatorial game theory to very late stage endgames. I never realized that the battle for the last point was so complex.

They were able to devise an endgame problem that would stump 9-dan pros, yet they could systematically work it out via their system.

Thanks for that, I’m now going down the rabbit hole of CGT

This makes me feel even more confused about the incredible balance between pro players through the entire game.
How is it possible to manage a win/loss by half point when the endgame is so important?

The end game might be important but it’s also the easiest to read. Still, even among pros there are some who stand out for their superior endgame at the top level.

I think it’s quite misleading and dismissive to use the word “easiest” to characterize the endgame. While one might argue that it could be “easier” (in some sense) than earlier parts of the game, since thorough, systematic analysis can become tractable, I still don’t think one should suggest that it is “easy”.

I thought that I had a pretty good grasp on the end game, since I was aware of some concepts like double-sente, reverse-sente, etc. However, my recent introduction to the concepts presented in the articles that I linked to earlier made me realize that there was a whole new layer of strategic depth and complexity that I was not aware of.

I’m amazed by this endgame problem that was devised by Berlekamp and Wolfe (white to move and win): 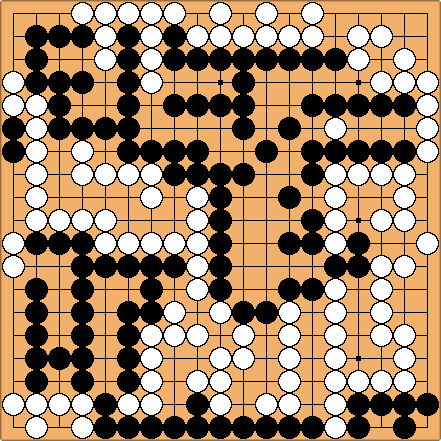 It would appear to be rather straightforward to handle, since it seems like there are bunch of equivalently valued endgame moves. However, finding the optimal line of play requires precise analysis (newly developed by Berlekamp and Wolfe). They managed to even stump several 9-dan professionals with this problem (before they taught them the new analysis techniques).

I think it’s quite misleading and dismissive to use the word “easiest” to characterize the endgame. While one might argue that it could be “easier” (in some sense) than earlier parts of the game, since thorough, systematic analysis can become tractable, I still don’t think one should suggest that it is “easy”.

I disagree. The easiest mountain to climb is still a mountain, and shouldn’t be considered “easy”.

It would be a mistake to hear that something is the easiest of a set of hard things, and to presume that that makes it “easy”

Shit like this is why I try to win as early as possible. I love the opening, am ok with the midgame, and hate the endgame.

I think you are missing my point. Of course, logically speaking, “easiest” is a relative term and does not necessarily mean “easy” in an absolute sense. However, using that specific word and even choosing to make that assertion seems to be making that suggestion and comes off as dismissive of the complexity of the endgame.

Further, I don’t believe that one can generally assert that the endgame is actually the easiest part of the game to read. It seems that determining the optimal line of play in the endgame requires a wholly unfamiliar form of analysis that comes from CGT. It is important to figure out the relative priority of seemingly equivalent endgame moves, however making such determinations seem to be beyond simple numerical quantification. Instead, these mathematicians have to resort to a system that involves quantifying different positions with newly defined quantities (“up”, “down”, “star”) in addition to fractional values. Maybe understanding this system would come easily to some, but frankly I’m a bit stumped so far. On the other hand, at least with the life and death problems that might arise in the middle game, the reading seems to be of more familiar variety.

I’m not sure how often go uses values of up, down, or star. But I do think tiny and miny are sometimes used. From what I can tell calculation for go mostly involves calculating temperature.

Nope I’m wrong, that’s what I get for not reading ahead. every hot game is made up of heated infinitesimals apparently