I have started this thread as means for you to follow, test out, discover, and possibly give feedback to anything new on the OGS website. Recently we have had 3 new “major” changes. Feel free to show appreciation to those who worked hard on them, or to provide constructive feedback if you think they might be improved upon (preferably in a new thread, please, so as to keep this one strictly informative).

A completely new beginner tutorial has been introduced

Designed solely for the purpose of helping new players understand the game quicker. (If you are a new player in the world of Go we would be especially interested in your opinion.)

We have a completely revamped ladder design

With search-bar and everything ;) If you never tried ladders before, now is the time to have a look (it's fun and you can be sure the game is taken seriously by both players)

There is a new "warning" system for unusual custom games

Based on reports of games where a player quickly accepted a new challenge only to discover it is super blitzy and timed out after three moves and other similar scenarios, there will now be a warning triangle displayed next to custom games with unusual or "extreme" settings. That is not to say there is something wrong with these games (keep having fun with them), but just to make sure you read the settings before accepting :) (As far as I know we can thank @GreenAsJade for this one)
20 Likes
AdamR January 14, 2019, 3:40pm #3

We have updated and remade the readme

You can see it through the link above, or by navigating via the burger menu on OGS. It is sort of a “first release” so if you see something wrong, or missing (or spelled wrong), we would very much appreciate if you let us know either via starting a new thread or just PMing me. (Also the promised section about keyboard shorcuts is there if you wanna be as effective as possible

I haven’t looked too deeply, but the one thing I noticed is “Lerning” should be “Learning” on the 4th bullet point (Lerning the Rules of Go)

I’m sure you must be seeing things 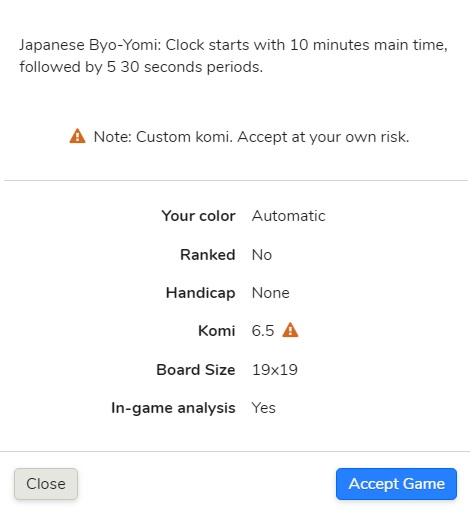 There is little bug with unusual komi warning.
If you set usual komi by using custom komi option, warning should not be displaying.

Nobody looks at those warnings anyhow, so I personally am not tempted to tackle this bug.

(It’s a known issue, and is in the class of “kinda hard to deal with” because (so far as I found so far) I can’t tell the difference: if you set a custom komi, then the client receives “a number which is custom”. I can’t see how to tell that the custom number is actually the number that some other totally different part of the code will chose if this number is not set)

In fact, I could be tempted to view it as a feature: if you’d like a warning, then set the komi manually. If you don’t want a warning, don’t do that