People keep asking me how the mobile client is going, so I figured I’d set up a quick diary in here and then I can just point them to my pre-canned thoughts instead of having to make polite conversation.

Some of the app will be open-sourced, but I’m currently thinking of charging $/£1 for the app to cover the costs of the licenses I need to publish into various app stores. Once the app breaks even, I’ll punt the rest of the money toward the OGS server costs.

I’m planning to reuse the go lib and rendering routines to write a joseki tutor and guess-the-move app. That might be bundled into the main client, or it might be something separate, we’ll see how it goes.

12 Likes
Is there any progress on making a phone client?
Are you a developer? Want OGS on a mobile device? (OLD Android and iOS app development thread)
pathogenix August 26, 2014, 10:48pm #2

PS if I time out in a game with you, I’m sorry, but I’m having far too much fun with code to think about go right now

So the go board stuff is done, I had a zen bug where stones became their own liberties, but that’s all fixed up and the unit tests are green.

There’s probably a whole bunch of corner cases that will cause my naive code to explode in confusion and fury, but it’s good enough for now.

The next thing to look at is the board rendering. I’ve given up on the sprite approach because it makes for yucky graphics when rendering small images, so I’m going to go raw OpenGL. That’s clearly overkill and a poor engineering decision, but this is a toy project, so I don’t have to make sensible decisions.

Next milestone is rendering a beautiful go stone at various pixel sizes. Thankfully, @anoek has some pointers on Life in 19 x 19, so I’m not starting from scratch.

Turns out OpenGL is a lot of fun, but a very strange processing model. I’ve never done any graphics programming before, so it’s an interesting challenge. The Marmalade SDK has a module called IwGL which wraps over OpenGL ES 1.0 - 3.0 and provides software renderers for anything that doesn’t run GL ES, so that’s kinda handy.

I’m currently thinking I’ll target OpenGL ES 2.0 which should cover anything reasonably modern. I’ll try to provide down-level support for OpenGL ES 1.1 later, since supporting iPad 1 is an explicit goal of the project, but that also means doing websockets from scratch, which I don’t want to contemplate right now.

With a little texturing, I think I can get something that will render quickly, look great at any resolution, and still allow me to zoom in on a single corner, or render tiny boards for the game list.

Wanna see a go stone? Of course you do! Here you go. There’s er… a few aesthetic issues to resolve, admittedly, but in the next post I should have something that looks a bit less… laughable. 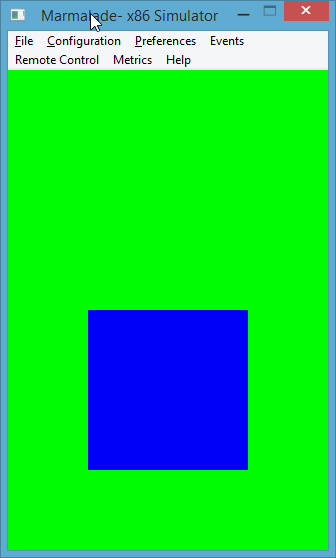 I’ll also throw in the publishing (cost) of publishing on the Apple AppStore and take the same conditions as you do (meaning I’ll put back the “profits” towards the OGS server costs).

Let me know if you have anything where you would like feedback on!