Opengotha is creating "pair down" in first round, above the bar of a McMahon Tournament

I will be running a McMahon tournament soon. I am running opengotha on my computer. I set the bar at 3K, having 10 players above the bar. After that, I have three 4K, no 5K, only one 6K. Opengotha is pairing like this for the first round:

Why is it doing that? Wouldn’t it be better to change it to:

Is there any way (other than manually pairing somehow) to forbid opengotha from doing this pair-downs? Is this a bug?

I deleted some players who are not participating, and changed the bar form 2K to 3K as a result of losing those players. There are exactly two 3K players, maybe that makes a difference and things have not “fully reset” after the bar change? All McMahon scores seem to be computed correctly correctly with the new bar though, only the pairings seem strange to me.

I figured it out: problem dissapears after changing secondary criteria to: 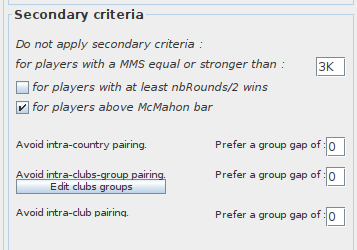 I loaded club data when loading players for this tournament, and the default has “1 2 3” instead of “0 0 0” there in the “prefer a group gap of:” fields. So the default makes opengotha really, really dislike pairing two players of the same club, going to great lengths of pair-down/pair-up to avoid it (even allowing score difference of 3!).

I was further confused because I thought this setting could not affect what I was observing, based on the “do not apply for players above the bar” checkbox. But that checkbox does not mean “pairings of players above the bar will not be affected”, rather, it means “when considering whether to try to avoid or not a particular pairing, if both players are above the bar, then do not consider a problem at all the fact of both being from the same club”. Here, the problematic players were the 4K and 6K: The 6kyu and two of the 4K are from the same club, so there is not enough room to avoid any pairing at all of two of the same club without doing many pairdowns/pairup, which then leads to the decision to pair up with the bar group.

Interestingly, judging by the github source code, those “prefer group gap” settings are input as integers but then used as floating point, so a value like “0.5” would make total sense, to make opengotha at least try to avoid pairing players of the same club, but still not at the price of a pair down/up.

Looking at the source code, it seems that a value of 0 makes it completely ignore same-club-pairings, unlike what I think would be the reasonable interpretation for the value 0: “Still try to minimize pair-down/pair-up, but as a second criteria when comparing pairings with the same pair-downs / pair-ups, prefer those minimizing the number of same-club matches”. Has anyone had a problem with this before? Or is it just that most tournaments actually use such high defaults and have no problem with such wide gaps if necessary to avoid same-club-matches?

In my experience, most tournaments in France do not forbid nor avoid same-club matches at all.